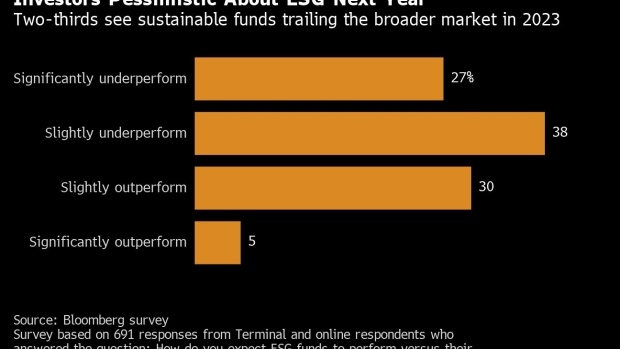 Republicans are pressing to get rid of it, regulators are cracking down on the misselling of ESG-labeled funds and bonds, and sustainable investing purists want to eliminate the acronym altogether. It’s also become less of a talking point for corporate executives.

Still, love it or hate it, most in finance have decided that ESG is here to stay. A survey of 550 Bloomberg Terminal users found that more than 60% expect ESG to be a standard part of, or increasingly critical to, running a business. By comparison, roughly a third of the respondents think the strategy that takes into account environmental, social and governance issues — and impacts roughly $40 trillion of assets — is just a “fad.”

European respondents were most optimistic about ESG’s importance, followed by those surveyed in Asia, with the Americas trailing at roughly 50%.

Paul Clements-Hunt, who coined the ESG acronym in 2004 with a team of United Nations employees, said the goal was always to help investors avoid losses and find ways to profit by drawing their attention to the evolving group of risks linked to the environment, society and corporate governance issues.

“No matter how you package it, these risks aren’t going away,” he said in an interview.

More than half of respondents to the survey of Bloomberg Terminal readers said they were taking action on ESG because it’s crucial to boosting corporate profits as opposed to having a positive impact on society and reducing carbon emissions. Some 62% of respondents said they were acting on ESG at the behest of their clients, while about three-fifths said they were doing so primarily to protect their companies’ reputations.

Other studies offer similar findings. A recent PwC survey showed that 89% of large investors said they’ve already rejected -- or would consider rejecting -- an asset manager due to shortcomings in their ESG strategies. The same survey showed 86% would be similarly dismissive of those whose corporate ESG efforts were inadequate.

Still, there’s evidence to suggest that corporate leaders aren’t talking about ESG as much as they were a year ago amid all the political and regulatory backlash. During calls with analysts and investors held in the third quarter, executives mentioned the acronym about half as often as they did at the end of last year, according to data compiled by Bloomberg.

And skepticism toward investment funds labeled ESG remains. Of the Bloomberg Terminal users surveyed, about two thirds expect such funds to either slightly or significantly underperform their market benchmarks next year.

Part of the issue with such assessments lies in calling something an “ESG” fund, according to sustainable investing veterans Ian Simm and Sandra Carlisle.

“We don’t find the ESG label to be particularly helpful,” said Simm, founder of Impax Asset Management, one of Europe’s largest sustainable investment firms with more than $40 billion of assets. It’s “just a relatively new packaging of something we already do.”

Carlisle, who’s worked in sustainable investing since 2005, described the 18-year-old ESG strategy as a teenager going though “growing pains” and said investors have done a poor job explaining what it is. The label should be ditched and replaced with “sustainable investing,” which actually “means something,” said Carlisle, head of sustainability at London-based Jupiter Fund Management Plc, which oversees about $53 billion.

At the same time, regulators are cracking down on sloppy references to ESG, and even handing out fines to heavyweights such as Goldman Sachs Asset Management. In the European Union, the markets watchdog recently suggested only allowing funds to call themselves ESG if at least 80% of what they do actually helps the environment or social justice.

Simm, who was doing impact investing more than a decade before “ESG” was invented, said he isn’t surprised by the criticisms of ESG.

And that pushback is starting to affect the flow of money. In the US, hardly any new capital was invested in ESG-labeled exchange-traded funds last quarter, according to an analysis by Bloomberg Intelligence. And most of the European flows went into sustainable fund classes known as Article 8 and 9, a growing number of which have ceased labeling themselves as “ESG,” BI analysts Shaheen Contractor and Athanasios Psarofagis wrote.

Fund managers that had once “waxed poetic” on their ESG efforts “seemed almost restrained, with more guarded answers,” according to the report from Austin, Texas-based Sage Advisory.

Sam Adams, co-founder of Vert Asset Management, which manages $175 million out of San Francisco, said the upshot for ESG is likely to be that the industry will start being more explicit about what it’s doing.

Instead of slapping “ESG” on funds, money managers will start telling clients that their capital is going toward tackling things like “extreme weather risk” or “energy price volatility,” he said.

--With assistance from Frances Schwartzkopff, Brad Skillman and Lisa Pham.