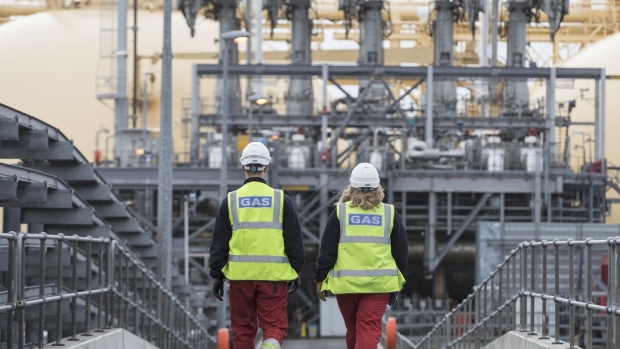 Employees cross a jetty towards the Gallina liquefied natural gas (LNG) tanker after docking at the National Grid Plc's Grain LNG plant on the Isle of Grain in Rochester, U.K., on Saturday, March 4, 2017. The shipment to England on the Gallina was priced using the U.K.'s National Balancing Point, where front-month gas cost about $7 a million British thermal units on Feb. 7. Photographer: Bloomberg/Bloomberg , Photographer: Bloomberg/Bloomberg

(Bloomberg) -- European Union countries are considering revisions to a plan for reducing demand for gas through the winter, after some governments demanded more flexibility.

EU ambassadors are due to discuss a plan for emergency regulation Monday, on the eve of a meeting of energy ministers. Governments want a higher threshold for triggering mandatory cuts.

The Czech republic, which holds the rotating presidency of the bloc, has included a provision that would increase the number of countries that have to request that a 15% demand-reduction target be made mandatory to five, according to a draft document seen by Bloomberg. An earlier provision was for three countries.

Member states called for “national specificities to be taken into account while setting up mandatory reduction targets” and “increasing flexibility in designing reduction measures,” said the document which is still subject to change.

The latest text highlights the strain the EU is feeling as it attempts to navigate a scenario of a winter without Russian gas. Up until last week, measures had largely focused on the supply side by seeking new sources of fossil fuels and scaling up renewables, while encouraging industry and citizens to reduce their consumption is seen as politically far more challenging.

A proposal for a mandatory cut in consumption would need majority backing from member states to take effect. An earlier version said such a move would have been carried out by the European Commission, the EU’s executive arm.

The commission has warned member states that if they don’t act this year they will face even tougher decisions next winter.

The Czechs put forward a number of potential carve-outs for nations, including taking into account the level of gas storage in a country as well as the possibility to exclude certain key industries, according to the document. Under the revisions, the rules will only be set for one year, rather than the two initially outlined, while countries not directly connected to another could also opt out.

Reductions could also be lower if countries send gas to others within the bloc.

Last week the commission set out a voluntary demand reduction target of 15%, which could then be made mandatory under an emergency situation, such as a cut-off of Russian gas flows. Several countries, including Italy, Hungary, Poland, Portugal and Spain, had raised concerns over the reduction goals, such as the impact it would have on society and that they didn’t adequately reflect cuts already made.

The document also says that following a request by countries, the commission is looking at the possibility of introducing price caps for gas or electricity.