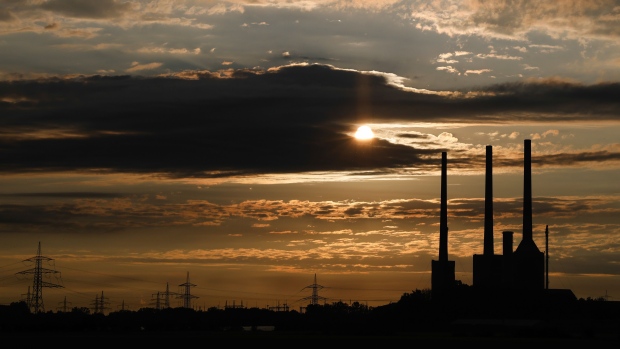 Electricity transmission pylons beside the flue-gas stacks at the gas-fired power plant, operated by Uniper SE, during sunset in Irsching, Germany, on Wednesday, July 7, 2021. Germany has an opportunity to phase-out coal power plants almost a decade ahead of schedule -- but it will require a fleet of natural gas plants to do it, a new study by Wartsila Oyj shows. Photographer: Michaela Handrek-Rehle/Bloomberg , Bloomberg

(Bloomberg) -- The European Union must not cave in to pressure to put new gas-fired power stations in its green rulebook if it’s serious about fighting global warming, according to a letter sent to the bloc’s leaders by over 150 nonprofit groups.

To do so would undermine the European Green Deal, “and send a disastrous global signal at odds with the urgent need for climate mitigation efforts,” the authors, which include WWF Europe and Reclaim Finance, wrote in the letter seen by Bloomberg. “New gas investments cannot be deemed compatible with” limiting temperature rises to the critical threshold of 1.5 degrees Celsius, they said.

The EU has avoided making a final decision on whether to include gas and nuclear power in its so-called green taxonomy, which lays the foundations for capital flows across the bloc. That’s amid pressure from some member states, like Poland, that want to fall back on gas as they try to transition away from coal.

Alexis Dutertre, France’s ambassador to the Czech Republic, tweeted earlier this week that the French and the Czechs were “like-minded” on including gas and nuclear in the EU’s taxonomy, drawing criticism from environmental groups.

The debate is intensifying as Europe struggles with an energy crisis that’s highlighted how bumpy the transition from old to new and cleaner power sources is proving to be. But critics of perceived foot-dragging toward a greener future are growing more vocal amid evidence that the planet is overheating at a dangerous pace. The International Energy Agency has said that averting a climate crisis means there can be no new oil, gas or coal fields.

“There is no room in the EU and OECD’s carbon budget for any new fossil gas-fired plant producing power and/or heat to be installed between now and 2035,” the nonprofits wrote in the letter.

Under the EU’s climate taxonomy, investment in energy activities is permitted only if it produces less than 100 grams of carbon dioxide per kWh life-cycle, a level that most experts see as requiring carbon capture and storage for gas plants. The bloc outlined a series of proposals in July to cut emissions by at least 55% by 2030, compared with 1990 levels.