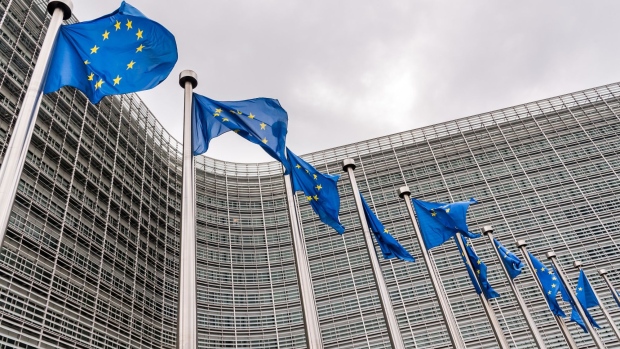 A line of European Union (EU) flags fly from flagpoles outside the Berlaymont building, which houses offices of the European Commission, in Brussels, Belgium, on Monday, June 8, 2020. British and European Union negotiators called on their political leaders to break the deadlocked negotiations over the two sides’ future relationship amid signs patience is wearing thin. Photographer: Geert Vanden Wijngaert/Bloomberg , Bloomberg

(Bloomberg) -- European Union leaders may backpedal on a French and German push to overrule vetoes to mega deals creating regional champions, focusing instead on reining in Silicon Valley.

Rather than a reform of M&A reviews, the EU’s summit on Sept. 24-25 will call vaguely for “reviewing the European competition framework” and potentially adding rules “on the systemic role and responsibilities of online platforms,” according to a draft text of what leaders will agree, obtained by Bloomberg News.

Extra firepower to deal with tech giants is something the EU has been seeking as it crafts legislation on so-called “gatekeepers” due later this year and weighs a new tool to swiftly extract concessions from companies that have grown too big.

But there’s no mention in the document of changes to merger investigations, where the EU has become one of the toughest regulatory hurdles to mega-deals, forcing companies to make big divestments or risk a veto if a transaction could increase prices for European customers.

Lawyers and officials previously reacted with alarm at the suggestion of giving politicians the right to overturn the EU’s independent merger decisions.

Vestager forestalled some criticism that regulators take too narrow a view of how companies compete, including against Chinese rivals, by looking at how enforcers define markets. She’s even planning to extend her reach to scoop up deals that currently escape her scrutiny.

Several smaller nations pushed back against the French-German move last year, backing the European Commission as an independent bulwark against larger countries.

The EU’s antitrust arm can block big mergers, levy huge antitrust fines and demand governments pay back unfair subsidies to favored firms. The German and French governments were concerned that these rules conflicted with industrial strategy, hobbling European firms against rivals that get state help to fuel their global expansion.

Leaders repeated a call for the EU to tackle businesses’ fears about Chinese state-owned firms. There, Vestager has taken action, suggesting such firms face financial penalties if they unfairly undercut European rivals.

Her department at the commission didn’t immediately respond to requests for comment on the EU leaders’ likely proposals.

Meanwhile European Commission President Ursula von der Leyen pledged on Wednesday to update the EU’s industrial strategy in the first half of next year and to “adapt our competition framework which should also keep pace” with the bloc’s shift toward green and digital technology. The next years will be a “digital decade,” she said.

“The last six months have only accelerated that transformation –- at a time when the global competitive landscape is fundamentally changing,” she said in her annual state of the union speech in Brussels.