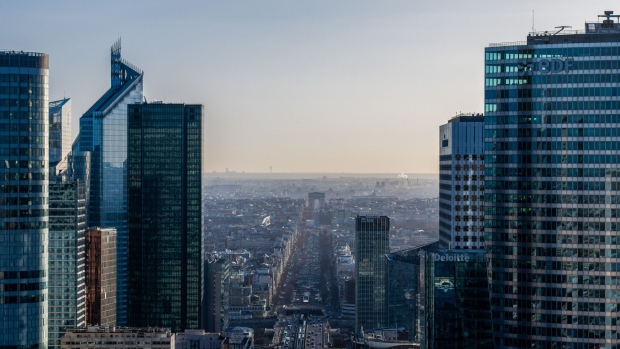 The Arc de Triomphe monument, center, at the end of Champs Elysee avenue on the city skyline beyond the Electricite de France SA (EDF) headquarters, right, and other skyscrapers in the La Defense business district in Paris, France, on Wednesday, Jan. 5, 2022. French President Emmanuel Macron took Europe’s aggressive stance against the unvaccinated up a notch, saying he wants to “p--- off” people who don’t get their Covid-19 shot. , Bloomberg

Buildings account for a third of energy-related direct and indirect emissions, according to estimates by the European Commission which has targeted the industry for reform. It has already proposed revisions to the Energy Performance of Buildings Directive, including minimum energy performance standards.

The plan is a sign of “encouraging changes,” but what’s needed is that “all EU member states become more ambitious” or “energy and carbon emissions reductions in the buildings sector are likely to fall short in the quest to meet Europe’s 2050 decarbonization objectives,” Oliver Rapf, executive director of the Buildings Performance Institute Europe, said in a statement.

Standards for construction vary widely across member states, and so far none has set a deadline for meeting net zero energy and carbon levels, according to an analysis by BPIE, which reviewed policies in the EU’s biggest countries, including Germany, France and Italy.