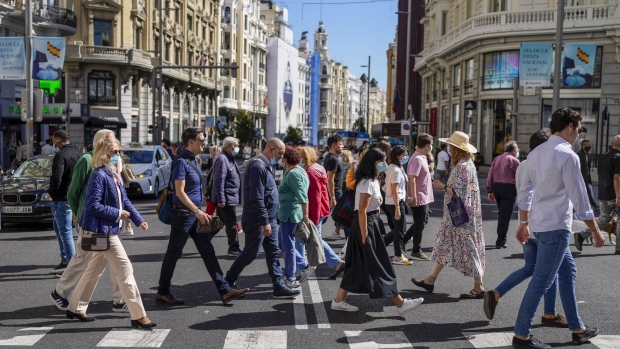 Shoppers cross the Gran Via in Madrid, Spain, on Thursday, Oct. 7, 2021. Spanish inflation quickened to the fastest pace in 13 years in September as surging electricity prices continued to push up household expenses in the euro zone’s fourth largest economy. Photographer: Paul Hanna/Bloomberg , Bloomberg

(Bloomberg) -- The European Union will give preliminary approval Friday to the reforms submitted by Spain to unlock 10 billion euros ($11.3 billion) of its recovery funds.

The European Commission will validate the first set of milestones fulfilled by the Spanish government as part of its cash-for-reforms package to counter the economic fallout of Covid-19, according to EU officials.

Spain is one of the largest beneficiaries of the EU’s unprecedented 800-billion-euro fund that EU leaders agreed to create last year. Madrid committed to sweeping reforms, including in the labor market and its pension system, to access near 70 billion euros in grants and another 70 billion euros or so in loans provided by the trading bloc.

Member states will have to ratify the commission’s approval of the Spanish request within one month to complete the disbursement.

The Spanish government is the first EU member to complete its first set of targets and milestones of its reform plan to unlock Covid funds. The funds are key to overhaul an economy highly dependent on tourism that is struggling to catch up to its peers after suffering the deepest contraction in the euro area last year.

The preliminary approval came less than a month after the country submitted its petition in November. Some EU officials had said that the EU executive’s arm was considering exhausting the two-month period foreseen in the legislation to review thoroughly the Spanish petition, given that this first assessment would set a precedent for the rest of the EU members.

The first installment covers 52 reforms and investments passed by the Spanish government since February last year, in areas including sustainable mobility, energy efficiency, connectivity and public administration or education.