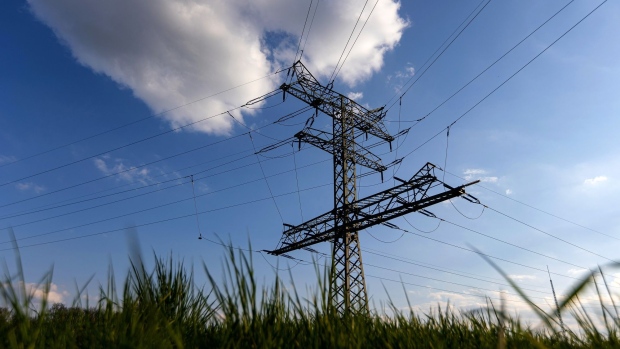 High voltage power lines at an electrical substation next to the Falkenhagen Power-to-Gas Pilot Plant operated by Uniper NV in Falkenhagen, Germany, on Monday, May 2, 2022. The pilot plant developed by Uniper, which posted a quarterly loss as it opted to keep natural gas in storage to sell later at higher prices, converts wind power into hydrogen and synthetic methane. Photographer: Krisztian Bocsi/Bloomberg , Bloomberg

(Bloomberg) -- European Union efforts to tackle climate-warming methane emissions are being undermined by energy companies that say the measures are too expensive, according to climate non-profit groups.

The bloc’s proposed rules to curtail leaks of one of the most powerful greenhouse gases are under threat of being diluted in negotiations between member states, the Clean Air Task Force, the Environmental Defense Fund and seven other non-governmental groups warned in a letter to French President Emmanuel Macron. France currently holds the EU’s rotating presidency.

The concern is that energy companies see requirements for leak detection and repair as too difficult and costly to implement and should be primarily focused on older facilities.

The NGOs also criticize member states for not yet addressing the methane emissions embedded within the EU’s imports during the negotiations. Under the Commission proposal, importers will have to provide information on how they measure and mitigate emissions. The bloc will review the import rules by 2025.

There has been “a strong and concerted effort by companies to water down the proposal,” the climate pressure groups wrote. “Imports have not received the attention necessary in the Council, given how crucial measures on imports will be to reach the goal of the regulation and address EU methane emissions.”

Tackling methane is seen as a quick and relatively easy way to help keep global warming within 1.5 degrees celsius due to its powerful heating effects, but relatively short lifespan in the atmosphere. It’s also a low-cost solution for companies to deploy and could even be financially beneficial given record high gas prices following Russia’s invasion of Ukraine. Over 100 countries have signed a pledge to reduce emissions by 30% by 2030.