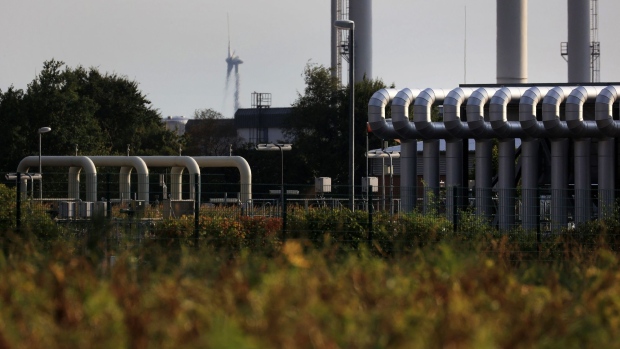 The natural gas storage facility operated by Astora GmbH & Co KG, one of the largest in Western Europe and formerly controlled by Gazprom Germania GmbH, in Rehden, Germany, on Tuesday, Aug. 23, 2022. Astora, a former unit of Gazprom Germania GmbH now named SEFE Securing Energy for Europe GmbH, is seeking relief from a levy to share the burden of higher gas prices with consumers, according to a person familiar with the situation. Photographer: Krisztian Bocsi/Bloomberg , Bloomberg

(Bloomberg) -- European natural gas futures fell again to their lowest level in almost two months as nations intensify efforts to ease the energy crisis with the start of the heating season less than two weeks away.

Benchmark prices dropped as much as 8.8% on Monday, extending last week’s decline. Germany, the U.K. and others plan to spend billions to ease their reliance on Russian imports, rescue local energy companies, and cap prices to alleviate pressures on businesses and households.

“The situation in European energy markets has started to improve across the last three weeks as policy action has taken shape and increasing evidence of price-induced demand response has emerged,” analysts at Timera Energy said in a note on Monday.

Discussions on the European Commission’s proposals to help reduce the impact of the crunch continue and need to be signed off by member states. The plans include raising 140 billion euros ($140 billion) from higher taxes on energy companies, mandatory curbs on power use during peak hours and increasing liquidity.

Germany’s decision on Friday to seize control of Russian firm Rosneft PJSC’s German oil refinery is seen as the first step in an overhaul that could give Berlin more control over the energy sector in Europe’s largest economy. The government is also in talks to nationalize Germany’s biggest gas importers, including Uniper SE and VNG AG, according to people familiar with the discussions.

The U.K. is developing a plan that may halve energy rates for many businesses, as part of a £40 billion ($46 billion) support package being finalized by new Prime Minister Liz Truss. France wants to cap energy-price hikes for households, a move that will cost the government a net 16 billion euros in 2023, according to Finance Minister Bruno Le Maire.

The effectiveness of these measures will be tested as Europe’s winter season begins and traders will focus on gas-storage levels. European inventories are about 86% full, slightly above the five-year average, according to Gas Infrastructure Europe.

Despite easing in recent weeks, gas prices are still more than seven times above the average for this time of year, worsening inflation and putting economies on the brink of recession. Demand is expected to gradually creep up ahead of the Oct. 1 start of the heating season.

Temperatures are set to decline to below normal toward the end of the month, weather forecasts show.

Dutch front-month gas, the European benchmark, was down 0.8%, trading at 186.38 euros per megawatt-hour by 3:39 p.m. in Amsterdam, after dropping to the lowest since July 25 on an intraday basis. The U.K. market is closed for a holiday.

Power prices declined too. Benchmark German year-ahead futures fell much as 8% to 470 euros a megawatt-hour.