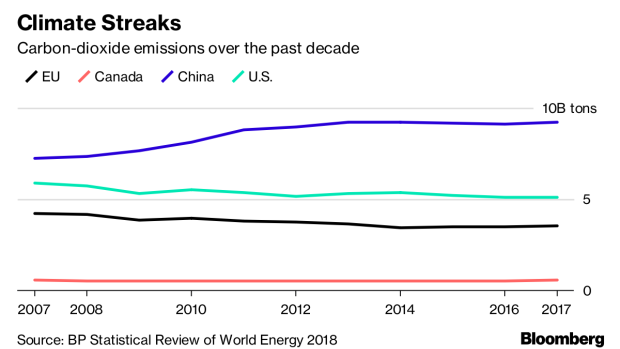 (Bloomberg) -- After a summer of record-setting temperatures that shut down power plants, delayed trains and scorched crops, Europe will look to seize the mantle of global leader in climate action and become the first carbon-neutral continent.

That plan will gather pace in Helsinki over the next two days, when the European Union’s central bankers and finance ministers will brainstorm on how to foster hundreds of billions of euros in investments needed to zero out greenhouse gas emissions by the middle of the century.

Incoming European Commission President Ursula von der Leyen said this week that protecting the environment is our “generation’s defining task,” adding that it’s a “moral, human and political obligation.” If left unchecked, a temperature increase of 3.5 degrees Celsius could cause 190 billion euros ($210 billion) in damages across the EU’s 28 countries, a net loss of 1.8% of output, and 200,000 heat-related deaths, according to an EU analysis that looked at the 2071-2100 time horizon.

“We need to radically step up our ambitions and really start the transition to a fossil-free world,” Sweden’s Climate Minister Isabella Lovin told a conference in Brussels on Sept. 11. “The EU is the only major power in the world now that can show global leadership and must assume that role.“

Climate has risen to the top of the EU political agenda, with 93% of Europeans seeing global warming as a serious problem, according to a recent survey by the commission. The EU proposed last year that Europe should reach net-zero emissions by 2050.

To attain that objective, the bloc needs to boost investments in the energy system and infrastructure by as much as 575 billion euros annually after 2030. Officials in Helsinki will discuss ways to mobilize private finance in the transition to climate neutrality, energy taxes, types of investments to be prioritized and the role of financial institutions, including the European Investment Bank.

“The financial sector has a key role to play in supporting the transition towards a climate neutral economy,” according to a document sent by Finnish officials in preparation for the meeting and seen by Bloomberg. “Supervisory authorities and central banks, including the European Central Bank, can play an active role in this re-orientation.”

The EU currently has a binding goal of cutting greenhouse gases by at least 40% by 2030 compared with 1990 levels and is crafting stronger policies to counter the more frequent heat waves, storms and floods tied to global warming. The commission estimates the 2030 target can be exceeded, putting Europe in a position to submit a more ambitious plan under the Paris Agreement to fight global warming. The bloc’s member states have stopped short of such a move so far.

Von der Leyen, who’s going to assume her job in November, has signaled she wants to raise the target for the next decade to 50% or even 55%. She has also thrown her weight behind the 2050 climate-neutrality goal, which EU leaders aim to adopt by March.

The Paris deal called on nations to work toward capping global temperature increases since pre-industrial times to 2 degrees Celsius (3.6 degrees Fahrenheit) and acknowledges the need to strive for 1.5 degrees. That would still be the quickest shift in the climate since the end of the last ice age more than 10,000 years ago. Without deeper cuts in greenhouse gases, the world is on track for warming of at least double the targeted pace.

“I want the European Green Deal to become Europe’s hallmark,” von der Leyen said to reporters this week while announcing the top officials in her cabinet. “At the heart of it is our commitment to becoming the world’s first climate-neutral continent.”

To contact the editors responsible for this story: Reed Landberg at landberg@bloomberg.net, ;Ben Sills at bsills@bloomberg.net, Richard Bravo, Tony Czuczka