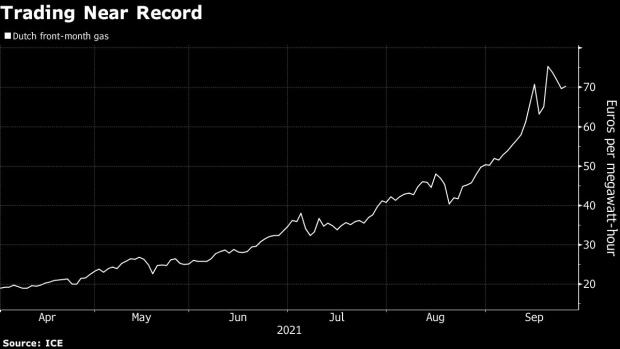 Europe’s energy crunch will prove more than just a short-term headache for mining companies because price spikes will be accounted for in long-term power contracts, Sweden’s Boliden AB said.

The mining sector is the latest to warn that it’s being hit hard by the spike in power prices. As producers of metals such as copper and zinc electrify mines and smelters to make operations less polluting, power costs become even more important to their bottom lines.

“Contracts will have to be renewed sooner or later. However they are written, you will eventually get hurt because of the situation in the market,” Mats Gustavsson, vice president for energy at metals producer Boliden, said in an interview. “If you are exposed to the market, the operational expenses have of course increased.”

Boliden hasn’t yet been forced to curtail operations or output because of soaring energy prices, but costs are rising, Gustavsson said, declining to be more specific. The company earlier this month signed a new long-term power supply contract in Norway, where it’s upgrading a smelter.

“The volatility is here to stay,” Gustavsson said. “What’s dangerous is that the lowest price is increasing all the time. So if you want to hedge yourself you will pay a much higher price.”

Boliden operates Europe’s largest zinc mine in Ireland, where the nation’s grid operator earlier this month warned of a generation shortfall that could lead to blackouts. The company hasn’t yet had any direct problems there, but the situation is “tough,” Gustavsson said.

While energy prices have eased a bit this week, Gustavsson expects the crisis is far from over. He cited the decommissioning of nuclear, coal- and gas-fired power plants with steady production as part of the fundamental reason behind the spike. That makes the market more dependent on intermittent supplies from wind and solar.

“If the situation looks like it does now in Europe and Sweden, and there’s not fundamental change, you can ask yourself what it will be like with a cold spell in the middle of November of minus 5-10 Celsius.”