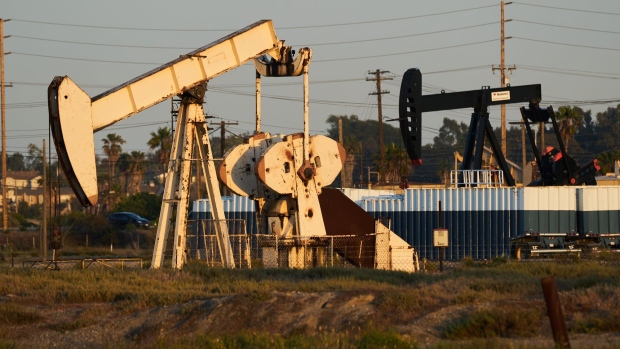 Pumpjacks extract crude oil from active oil wells at the Synergy Oil Field on the Los Cerritos Wetlands in Seal Beach, California, U.S., on Saturday, April 23, 2022. U.S. natural gas prices have almost doubled this year to the highest since the shale revolution more than a decade ago, driving up energy costs and helping fuel the fastest inflation in 40 years. Photographer: Bing Guan/Bloomberg , Bloomberg

(Bloomberg) -- Europe is set to receive three shipments of US Strategic Reserve crude so far as the region debates how to cut its reliance on Russian crude in the wake of Putin’s war with Ukraine.

Two tankers are en route to Italy and the Netherlands after loading supplies over the past two weeks from terminals linked to reserve storage caverns in Texas and Louisiana, according to people familiar with the matter and ship-tracking data compiled by Bloomberg. Both cargoes were high-sulfur SPR oil, they said.

The world has been grappling with a severe energy supply disruption since Vladimir Putin’s invasion of Ukraine triggered international condemnations and calls to ban Russian exports. While the US and UK have announced embargos on Russian crude and refined products, the European Union has so far failed to agree to a ban as some members ask for exemptions. Nonetheless, with so many oil companies unwilling to handle Russian crude, Europe has been forced to look further afield to replace those lost volumes.

Prior to the two cargoes underway, another shipment of SPR crude left Texas and was delivered into the Netherlands around April 26, according to tracking data.

About 1.6m bbl of SPR crude was sent to Europe in April, said Matt Smith, oil analyst at commodity data firm Kpler. “That’s the largest amount of SPR crude that’s been shipped to the continent based on historical monthly data.”

One ship, the Sea Holly, received SPR oil from Seaway Pipeline’s Freeport, Texas, terminal around April 29 and is now sailing for Trieste, Italy, tracking data shows. The Seaqueen picked up its cargo from Energy Transfer’s Nederland, Texas, terminal,  around May 2 and is destined for Rotterdam, data show.

“Its likely these wont be the last of such SPR exports since Europe is still in the midst of working out a ban on Russian oil,” said Smith.