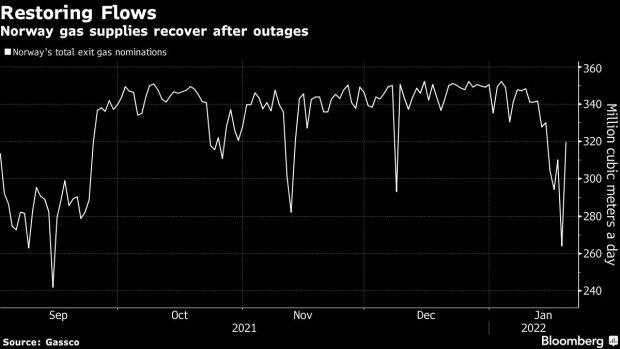 (Bloomberg) -- European natural gas slumped as a top LNG importer in China prepares to flood the market with fuel that could further ease supply concerns in the continent.

Benchmark futures fell as much as 8.9%, tracking weaker prices in Asia. The trading arm of Sinopec is offering to sell dozens of spot liquefied natural gas cargoes this year, according to traders with knowledge of the matter. The move indicates China is well stocked and more gas could come to Europe, helping to ease pressure from its abnormally low inventories and curtailed supplies from top exporter Russia.

“Gas market sentiment is cautiously bearish this week, driven by tepid demand in Asia and robust LNG imports into Europe,” consultant Rystad Energy AS wrote in a note. “Though the U.S. has eyes on potential weather-related shutdowns in the coming days.”

Gas prices in Europe and Asia “have likely peaked already this winter,” Citigroup Inc. analysts wrote in a report this week. That’s “unless a severe cold shot were to hit sometime in the next two months, or geopolitical tensions involving Russia were to escalate substantially.”

Tensions over Ukraine and the new Nord Stream 2 pipeline from Russia to Germany remain on traders’ radar. Germany said the controversial project would be a target for retaliation if Russia uses energy as a weapon, while Moscow reiterated it has no plan to strike at Ukraine.

As much as 30 billion cubic meters of additional gas from Russia may be available to Europe this year, Rystad says, however there is a risk “of almost none of that materializing” if the tensions escalate to military conflict.

For now, Russia’s exporter Gazprom PJSC is withholding spot gas offers, while supplies under its long-term contracts dropped sharply. The company says that’s because of lower requests from European buyers. Gas flows through Russia’s Yamal-Europe pipeline to Germany have been reversed for the past four weeks, while deliveries through Ukraine remain far below normal.