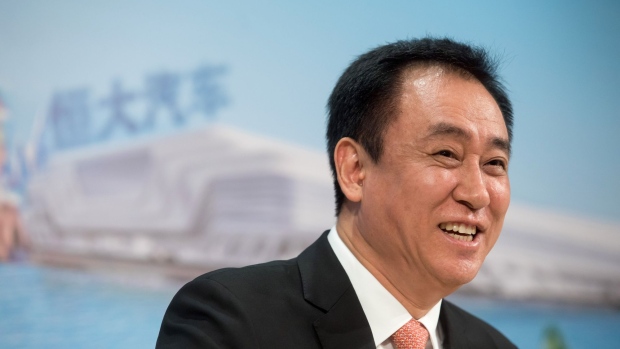 (Bloomberg) -- As China Evergrande Group mulls a special dividend to revive confidence in its tumbling stock, analysts are gaming out several scenarios that could have markedly different implications for equity and bond investors.

Chairman Hui Ka Yan, who directly or indirectly controls three-quarters of outstanding Evergrande shares, will meet with the company’s board Tuesday to decide on the payout.

Both equity and bond holders -- which include long-time supporters and old friends -- have been rattled in recent weeks by a slew of reports about wary banks and unpaid dues to suppliers. Evergrande needs to reassure the market that it has ample ammunition to make good on its borrowings while also countering short-sellers.

The last time Evergrande rewarded shareholders with a special dividend, in 2018, its earnings were soaring though bearish bets abounded then too. It has since seen annual profit drops for 2019 and 2020, with total liabilities swelling to $301 billion.

“Evergrande may be using the dividend plan to emphasize the stability of its cash flow and profitability, especially after the recent debt pressure,” said Yan Yuejin, research director at Shanghai-based E-house China Research and Development Institute.

Analysts reckon Evergrande will take one of three routes: a cash dividend, a stock dividend or handing out shares in its higher-value listed subsidiaries.

A cash dividend would be controversial given its share holding pattern and the dire need to pay down debt. Even so, Evergrande could justify it by pointing to a first half of record sales and cash inflows.

Apart from Hui, who owns almost 77% of the outstanding stock through companies controlled either by him or his wife, others who stand to benefit include billionaire Joseph Lau. Hui and Lau, a long-time supporter whose wife holds 8.9% of the company, are both part of the “Big Two Club” of tycoons who play the poker game of the same name.

“Paying a large special dividend is effectively a way of recycling capital back to the two main shareholders,” said Travis Lundy, a special situations analyst who publishes on Smartkarma. “They may use the funds to buy more of what Evergrande spins out.”

Hui can’t use too much of the cash to prop up Evergrande’s share price. The developer’s free float is approaching the 22.04% minimum required by the Hong Kong stock exchange. It has though been weighing listings of its tourism and bottled water businesses, according to people familiar with the matter.

Others expect Evergrande to hand out shares from its main listed entity in Hong Kong. While this may benefit long-term investors, a dividend comprised of stocks could end up driving shares lower in the near-term, adding to a 31% collapse in the past month.

“I am more leaning toward equity distribution given the tight liquidity,” said Eddie Chia, a portfolio manager at China Life Franklin.

The third option -- and potentially the one the market would favor -- is giving away shares of Evergrande’s subsidiaries. Options include Evergrande’s Hong Kong-listed new energy vehicle business or its property management operation. Such a scenario could be slightly positive for both shareholders and creditors.

With Evergrande’s market capitalization falling below its assets, owning shares in these subsidiaries would be a win for shareholders. Shares of China Evergrande New Energy Vehicle Group Ltd., which was worth more than Ford Motor Co. a few months back, tanked after the dividend proposal.

Depending on the dividend, if Evergrande loses its controlling stake in the electric vehicle start-up, the developer may deconsolidate it from its balance sheet and pare nearly 60 billion yuan of credit tied to the EV unit. That would showcase Evergrande’s efforts to pare debt and meet China’s “Three Red Line” metrics, a move that would benefit its relationship with banks.

“In reality it doesn’t really solve their liquidity,” issue, China Life Franklin’s Chia said. “But at least they are trying to do something so we can give them credit for that.”