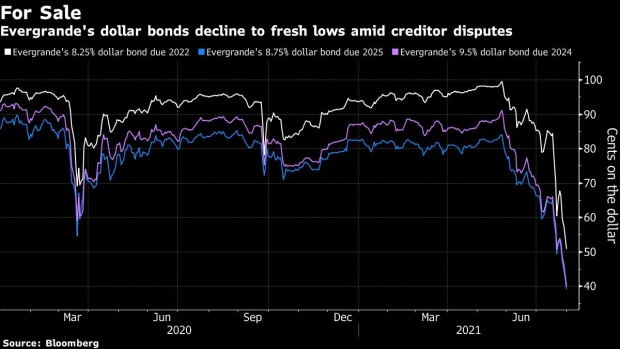 (Bloomberg) -- China Evergrande Group’s crisis deepened after a court froze assets of its listed onshore subsidiary, spurring another selloff in its shares and bonds.

The entire 20% stake in Shanghai-listed Langfang Development Co., held by the developer’s main onshore unit, was frozen from Thursday for three years, an exchange filing showed. The order is the result of a civil lawsuit between Evergrande units and a state-backed builder on shanty-town homes and infrastructure in Wuhan, a city in central China, the filing said, without providing details.

Shares of Evergrande’s main property entity plunged as much as 11% in Hong Kong to their lowest level since January 2017. Its service unit and new-energy vehicle startup resumed declines after a two-day gain.

The developer’s onshore and offshore notes are sinking to fresh lows Friday. Its 11.5% dollar bond due 2022 is poised for its biggest drop since September after falling to 39.1 cents on the dollar. A 6.8% local bond due 2024 fell 9% to 59.6 yuan, according to data compiled by Bloomberg.

More creditors are publicizing their disputes with the developer to protect their assets, a trend that may spark further investor concern about the company’s financial health. Markets were spooked last week by a loan dispute Evergrande had with Guangfa Bank, which led to the freezing of a $20 million deposit held by its main onshore subsidiary.

Others have since followed.

Peace Tree Wood Ltd. said Evergrande missed payments on 2 million yuan ($309,000) of commercial bills. Huaibei Mining Holdings Co Ltd. also filed a lawsuit in Anhui province, alleging a unit had missed payments. The crisis-ridden company said in a filing on Friday that the unit is trying to resolve the dispute via litigation and that Evergrande Real Estate Group Co. isn’t a party to the contract.

Lanzhou City in China’s northwest said the developer’s affiliates were among dozens owing it money for land, according to a local media report Friday.

“The developer needs to take more action to settle those lawsuits as soon as possible to regain investor confidence,” said Wong.

The loan dispute with Guangfa, which was later resolved, pointed to “the fragility of the company’s funding situation,” S&P Global Ratings said earlier this week, lowering the credit rating by two notches.

The Wuhan builder requesting the asset freeze sold its equity in a unit to Evergrande’s local subsidiary last year. A 682 million yuan payment was made via commercial bills which were risky, ratings agency CSCI Pengyuan wrote in a report last month.

Evergrande’s total liabilities -- which includes commercial bills and other short-term payables -- grew to a record 1.95 trillion yuan last year, even as the debt line item on its balance sheet has shrunk.