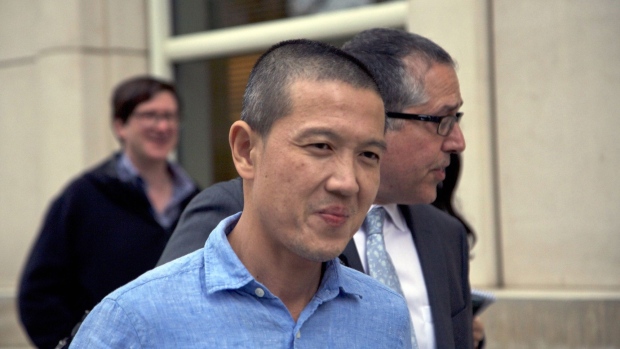 Roger Ng outside court in Brooklyn, New York, in 2019. , Bloomberg

Former Goldman Sachs Group Inc. banker Roger Ng asked for the foreign bribery case against him to be dismissed, saying he “warned” the bank not to do business with Malaysian financier Jho Low.

Ng, who says he told Goldman that Low was “not to be trusted,” is facing trial next year on charges of bribery and money-laundering conspiracy. He is accused of helping Malaysia’s former prime minister and others embezzle at least $2.7 billion from the 1Malaysia Development Berhad fund, known as 1MDB. Low is accused of masterminding the scheme.

In a 126-page filing, Ng says the U.S. has no business prosecuting him because the alleged crimes were committed in Malaysia. He also argues that his former boss, Tim Leissner, an ex-Goldman banker who has agreed to plead guilty and testify against him, is really the central figure in the scheme because he ultimately persuaded the bank to do business with Low.

As early as March 2010, Ng “specifically warned” his superiors at Goldman to “use caution in dealing with Low,” defense lawyer Marc Agnifilo says in the filing. “Ng’s warnings were shared with the highest levels of the compliance and legal divisions of the company. The company did not listen to him.”

Goldman spokeswoman Maeve DuVally, Leissner attorney Henry Mazurek and John Marzulli, a spokesman for Acting U.S. Attorney Seth DuCharme in Brooklyn, New York, whose office is prosecuting the case, declined to comment on the filing. Low, who has denied wrongdoing, is considered a fugitive and has been charged in absentia in Malaysia and the U.S. with money laundering and other offenses.

Goldman has agreed to pay billions of dollars in penalties to the Justice Department and other U.S. authorities for its role in the 1MDB scandal, the biggest foreign bribery case in U.S. enforcement history.

Ng concedes that he first introduced Low to the bank, but says that was “in early 2009, when no one had reason to know that Low was running a fraud scheme.” By 2012, he says, Leissner had become Low’s main Goldman contact and the “more powerful” and “rain-making partner.”

“It was Leissner, and Leissner alone, who thereafter lied for Low, protected Low and ultimately became a full-fledged criminal in the service of Low,” he argues.

Leissner, who was one of Goldman’s top bankers in Asia, admitted to conspiring to launder money and violating U.S. anti-bribery laws as he participated in a kickback scheme from 2009 to 2014 to get 1MDB’s business. He is scheduled to testify against Ng at the trial.

In the filing, Agnifilo also assails a “silence” provision he says the U.S. put in place as part of its multibillion-dollar deferred prosecution agreement with Goldman. The requirement means that any Goldman official Ng warned about Low will now be “afraid” of telling the truth, worried it would void the bank’s deal with the U.S., he says.

He says the provision, “enforced at the sole discretion of the government, ensures that no Goldman employee will contradict the government’s narrative relating to Goldman’s misconduct -- including Ng’s alleged misconduct for which he is charged.” Agnifilo argues that “this creates a constitutional issue in this case” by constraining Ng’s use of witnesses in his defense.

Ng, who is free on a $20 million bond, is scheduled to go on trial in March.