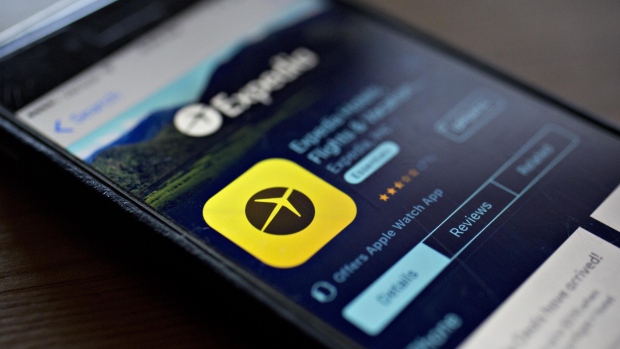 The Expedia Inc. application page is displayed in the Apple Inc. App store on an iPhone in an arranged photograph taken in Washington, D.C., U.S., on Tuesday, Feb. 7, 2017. Expedia Inc. is scheduled to release earnings figures on February 9. , Bloomberg

Expedia Group Inc.’s reported fourth-quarter earnings that beat analysts’ estimates, but growth in its home rental service, which has been fueling revenue, is beginning to fade.

In 2015, Expedia spent US$3.9 billion buying the vacation home-rental site HomeAway to compete with rival upstart Airbnb Inc. The bet showed signs of paying off last year, with HomeAway powering sales growth in the first three quarters last year. In the fourth quarter, revenue from HomeAway grew 20 per cent, the slowest rate of the year. Gross bookings at HomeAway grew 15 per cent versus a year earlier. That was down from 47 per cent growth in the fourth quarter of 2017

The Bellevue, Washington-based company reported profit excluding some costs of US$1.24 per share in the fourth quarter, beating analysts’ estimates of US$1.06. Revenue in the three months through Dec. 31 rose 10 per cent to US$2.56 billion, analysts had predicted revenue of US$2.54 billion.

Analysts were looking for signs that Expedia’s results would justify a runaway share price so far this year. The stock is up almost 18 per cent from a low in early January and it closed Wednesday at the highest since November. The shares oscillated in extended trading and were down about 1 per cent after ending the day almost unchanged at US$127.87.