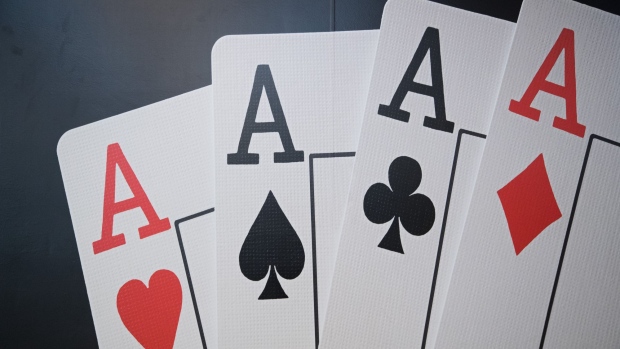 Images of playing cards are seen at the Kangwon Land Inc. casino in Sabuk, Jeongseon, South Korea, on Wednesday, Dec. 21, 2016. The proliferation of gambling addicts in Sabuk is serving as a warning for lawmakers in South Korea -- and more recently Japan -- enticed by the potential for tax revenues and economic gains. , Bloomberg

A new artificial intelligence program the company built with Carnegie Mellon University called Pluribus recently beat five poker professionals in a six-player Texas Hold’em tournament. After 10,000 hands, the system averaged profits of about US$1,000 per hour using US$1 chips, a “decisive margin of victory,” according to a Facebook blog post.

AI has been besting humans at poker for a couple of years, but previous programs could compete with just a single player at a time. Given the complexities that come with poker, including techniques like bluffing, beating five humans in a single game is a significant milestone, Facebook said.

“No other game embodies the challenge of hidden information quite like poker, where each player has information (his or her cards) that the others lack,” Facebook wrote in a blog post. “A successful poker AI must reason about this hidden information and carefully balance its strategy to remain unpredictable while still picking good actions.”

Building a poker superstar may seem like an odd use of AI resources given Facebook has so many other issues. The social network is still facing a constant battle against fake news and other types of misleading, troubling and dangerous content. When video of a live shooting was uploaded to Facebook in March, duplicates were uploaded 1.5 million times and more than 20 per cent of them slipped past Facebook’s AI systems.

Facebook AI Research, the group behind the poker bot, isn’t developing AI for any specific product, said Noam Brown, the company researcher who led the card-playing work. Instead, the group is looking at AI more broadly, with the hope of applying its findings to industrywide problems. Many of the hardest challenges facing AI programs, like navigating a self-driving car through traffic or understanding human negotiations, include “hidden information,” similar to poker.

“The techniques are general enough to go beyond poker,” Brown said. “That’s the goal.”