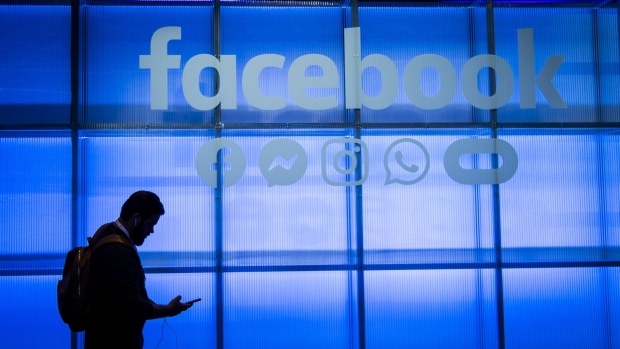 An attendee looks at a mobile phone while walking the demonstration room during the F8 Developers Conference in San Jose, California, U.S., on Tuesday, April 30, 2019. Facebook Inc. unveiled a redesign that focuses on the Groups feature of its main social network, doubling down on a successful but controversial part of its namesake app and another sign that Facebook is moving toward more private, intimate communication. Photographer: David Paul Morris/Bloomberg , Bloomberg

(Bloomberg) -- Facebook Inc. has disabled the personal accounts of a group of New York University researchers studying political ads on the social network, claiming they are scraping data in violation of the company’s terms of service.

The company also cut off the researchers’ access to Facebook’s APIs, technology that is used to share data from Facebook to other apps or services, and disabled other apps and Pages associated with the research project, according to Mike Clark, a director of product management on Facebook’s privacy team.

The researchers are part of a project called the NYU Ad Observatory, which asks people to download a browser extension that collects data on what political ads the users see on Facebook, and how those ads were targeted.

Political ads on Facebook have been a source of contention for years. The company has a controversial policy against fact-checking political ads, which led to criticism that candidates would pay the company to spread lies through their ads. Facebook eventually halted all new political ads in the week leading up to the 2020 U.S. election in an effort to fight misinformation.

Last October, Facebook sent the researchers a cease-and-desist letter demanding they stop collecting targeting data about Facebook political ads, and threatening “additional enforcement action.” Laura Edelson, a researcher at NYU’s Tandon School of Engineering, told the Wall Street Journal at the time that the group would stop if Facebook published the more nuanced data itself.

Clark said Facebook offers targeting data sets for political ads, and has suggested the NYU group use that information. According to Facebook’s terms of service, a user may not “access or collect data from our products using automated means (without our prior permission) or attempt to access data you do not have permission to access.”

Facebook moved to penalize the researchers in part to remain in compliance with a 2019 data privacy agreement with the Federal Trade Commission, in which the company was punished for failing to police how data was collected by outside developers, Clark said. Facebook was fined a record $5 billion as part of a settlement with regulators.

Researchers from the Ad Observatory didn’t immediately respond to a request for comment.

The NYU-led research project started before the 2020 U.S. election to better study the thousands of political ads on the social network. Political ads on Facebook are public in a searchable database, including some demographic data about the gender and location of people who saw the ad. But the database doesn’t include details about how an ad was targeted, part of the information the Ad Observatory was trying to collect.

Facebook’s political ad library is “is complicated to use, untold numbers of political ads are missing, and a significant element is lacking: how advertisers choose which specific demographics and groups of people should see their ad -- and who shouldn’t,” the Ad Observatory researchers said on their website.