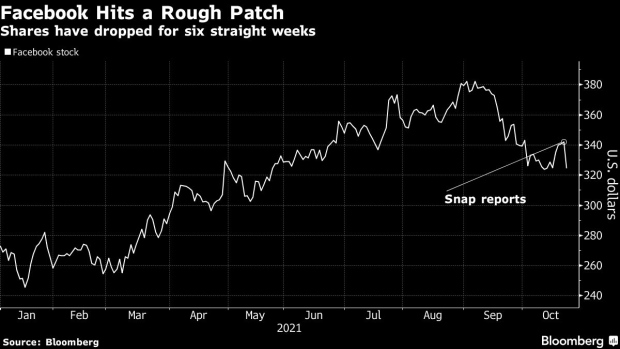 (Bloomberg) -- Wall Street has remained resolute in its support of Facebook Inc.’s stock ahead of its earnings report on Monday despite a barrage of negative headlines and steady decline for its share price.

Some 80% of analysts tracked by Bloomberg recommend buying Facebook shares, while only 5% have the equivalent of a sell rating. That kind of positive consensus is common for the biggest tech names -- for example, every Amazon.com analyst recommends buying the stock -- but Facebook stands out after shares suffered a record six-week decline, pushing the price near the lowest level since May.

Facebook is down about 15% off a September peak, a retreat that has erased about $163 billion in value and briefly pushed the company’s market capitalization below that of Tesla Inc. It faced more pressure on Friday after Snap Inc.’s results disappointed on the back of supply chain issues and changes in privacy policy at Apple Inc. -- factors expected to also weigh on Facebook’s third-quarter report, due after the market closes.

Shares fell 1.2% in premarket trading on Monday after a consortium of news organizations including Bloomberg News reported that staff members at the social media platform’s faulted the company for contributing to the U.S. Capitol riots on Jan. 6 and also have said some core products make disinformation worse.

The weakness over the past few weeks follows negative headlines and intense scrutiny over Facebook’s content strategy and some of its products; since September, the company suffered a global outage, a corporate whistle-blower shared internal documents with regulators and the media, and a rise in Treasury yields spurred widespread weakness in growth names.

Investors and analysts sticking with the stock cite Facebook’s ability to recover from selloffs and controversies. This resiliency is due in part to the company’s central position in the market for global internet advertising, where its 2020 market share was second only to Google, according to Bloomberg Intelligence data.

Ad budgets continue to shift online, with Facebook among the biggest beneficiaries of this trend. Monday’s third-quarter report is expected to show 2.77 billion daily active users across its platforms, while revenue is expected to rise 37%, extending a years-long streak of double-digit growth.

The stock is also considered a bit of bargain among big-cap tech names. Facebook’s price-to-earnings ratio is 24, near its lowest since April 2020, and below the 26.4 ratio for the S&P 500 Index. It is also trading at a discount to its average historical multiple, according to data compiled by Bloomberg. The average analyst price target points to upside of about 30%, the strongest return potential among Wall Street’s biggest names.