Facebook Inc. unveiled its long-awaited smart glasses in partnership with Ray-Ban, entering a nascent wearables market with a focus on capturing photos rather than augmented reality.

The social network on Thursday showed off the glasses, called Ray-Ban Stories -- a direct rival to Snapchat’s Spectacles. The US$299 Facebook glasses, which use EssilorLuxottica SA-owned Ray-Ban’s classic Wayfarer frame style, let users take photos and video, listen to music and answer phone calls. While they lack AR, the technology that overlays digital content on the physical world, Facebook says it eventually plans to embed that functionality.

“We are building towards AR glasses as the next computing platform,” Monisha Perkash, a product director at Facebook, said in an interview. “We see it as a very important first step towards that vision.”

Facebook is entering an increasingly crowded market. Snapchat parent Snap Inc. first released Spectacles in 2016 with a built-in camera for shooting video. In 2019, Amazon.com Inc. launched smart glasses to take calls and use Alexa, but those also don’t include AR. In May, Snap also announced a version of Spectacles that feature AR capabilities, although those aren’t available for consumers. Apple Inc. plans to enter the glasses space later this decade with an AR-capable offering, Bloomberg News has reported.

To the naked eye, the glasses don’t look much different than classic Ray-Bans. But the plain appearance conceals an array of smart features: dual 5-megapixel camera sensors; embedded Bluetooth 5.0 and Wi-Fi to synchronize with a phone; a battery; enough storage for 500 pictures; and speakers. A user can snap a photo by pressing and holding a button on the right side of the glasses, or can record video by pressing it once. 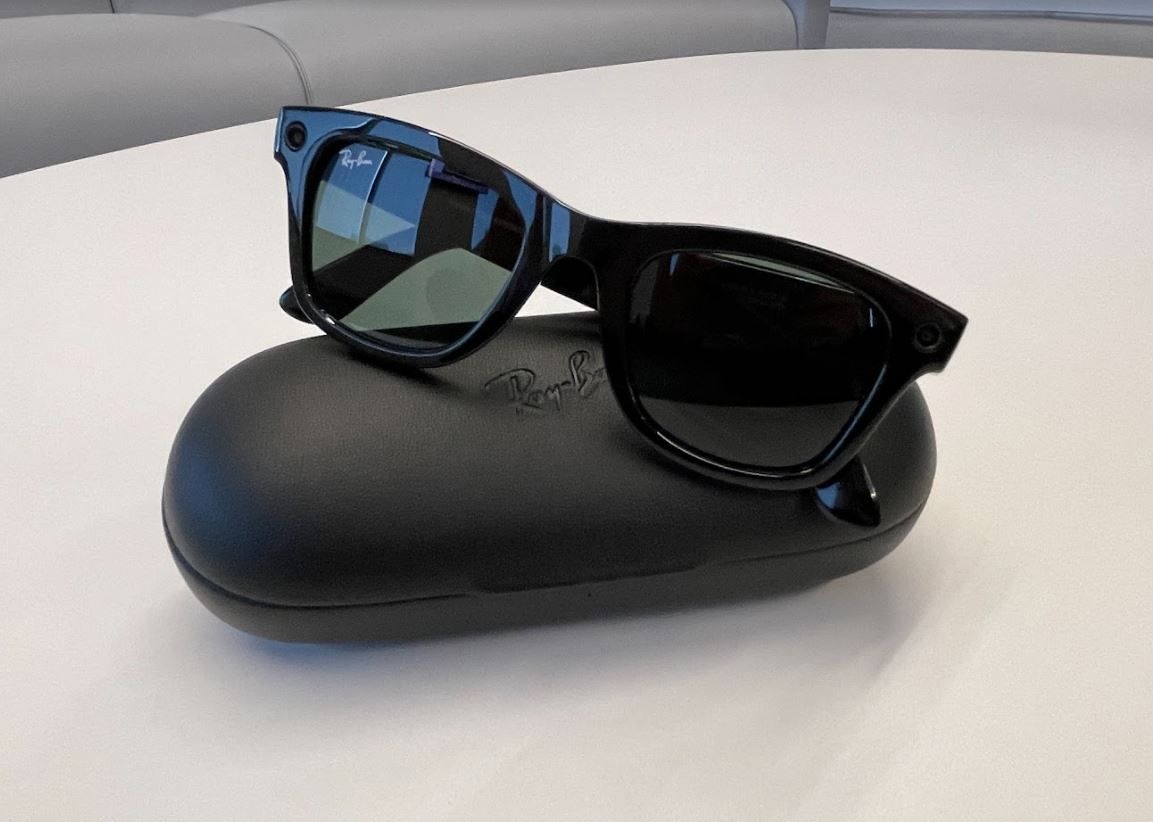 There’s also a touch area on the right side of the glasses for controlling music, a voice assistant and calls. A user can swipe left or right to adjust volume, tap to play, pause and skip music, or double tap to answer and end phone calls. A basic Facebook voice assistant is also present.

Facebook didn’t say when it will have true AR glasses on the market, but such a device is part of the company’s long-term strategy to build out what Chief Executive Officer Mark Zuckerberg has been calling the metaverse -- digital worlds where people spend time together using devices powered by virtual reality. Zuckerberg has said he thinks virtual and augmented reality-powered devices are the next major platform for human communication, after mobile phones, eventually replacing some in-person interactions.

If Facebook is successful in the device market, it will be able to build out its advertising and messaging business without having to rely on operating systems and gadgets created by competitors such as Apple Inc. and Google. The company’s hardware division also sells Oculus VR headsets and Portal video-chat devices, and it’s planning to add AR features to Oculus products later this year.

While the product is a late entry, coming several years after Snap’s Spectacles and eight years after the introduction of Google Glass -- the search giant’s early attempt at AR glasses -- Facebook’s offering may still raise privacy questions with consumers. The glasses will collect data that Facebook says it needs, like battery life and Wi-Fi information, plus a user’s login credentials for a required Facebook account. Users will also have the option to share more data, including the number of photos they have taken and the length of videos. 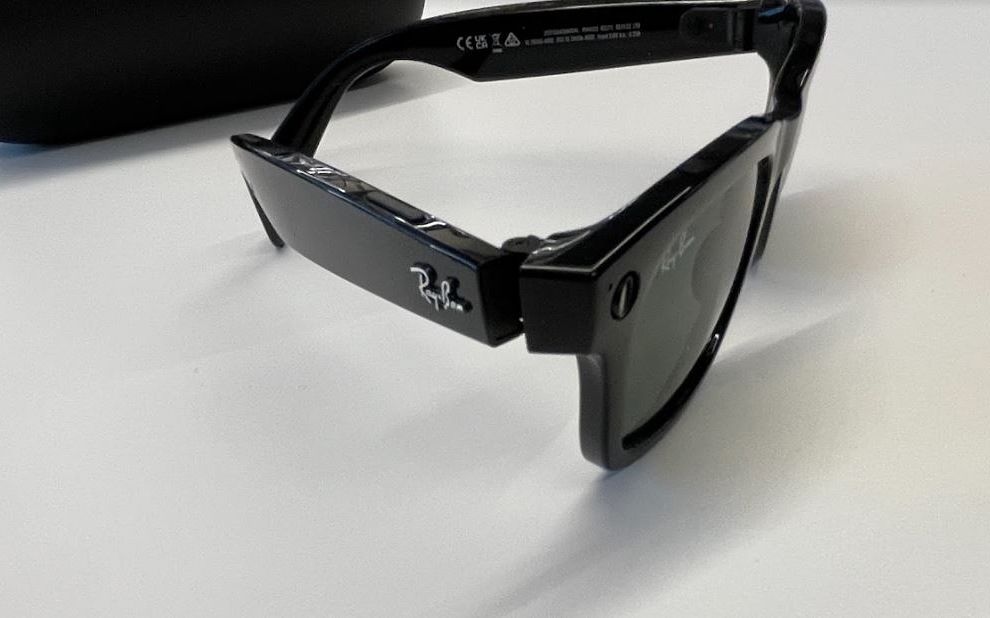 The glasses aren’t a stand-alone product, so music and calls are streamed to the glasses from an iPhone or Android phone via Bluetooth. Facebook is requiring the use of an iPhone or Android app called Facebook View, which is used to manage and set up the glasses. When a user takes a photo or video, the media will appear in a section of the app. A user can then choose to download that photo or video to their device for storage and editing.

Ray-Ban Stories essentially mix the functionality of earbuds like Apple’s AirPods with sunglasses that can capture photos. It’s not clear whether such a product will find a large market, given that the photos taken on smartphones are far superior and many phone users already have earbuds. They are also much pricier than regular Ray-Ban Wayfarers, which typically cost US$100 to US$200. 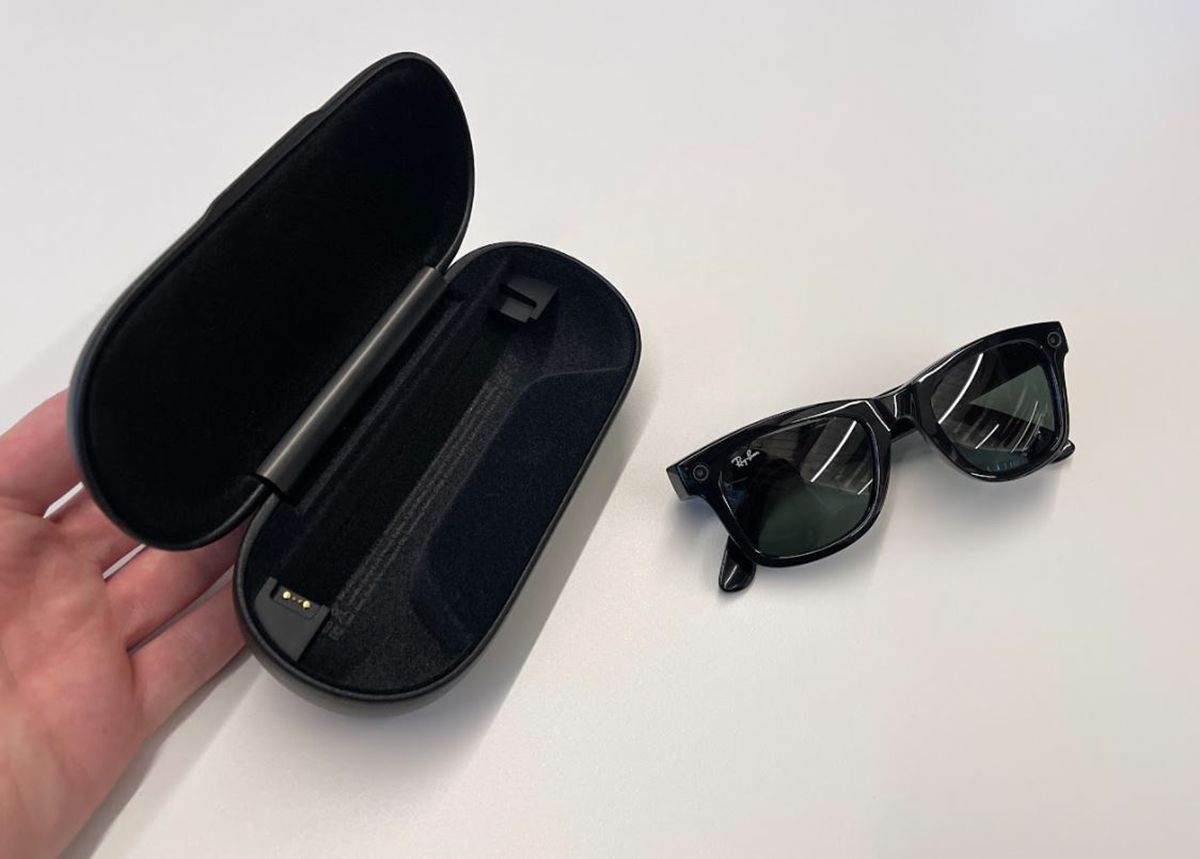 The glasses are being launched in the U.S., Canada, U.K., Ireland, Italy and Australia, and include a charging case similar to the one that houses AirPods. The glasses on their own get about six hours of battery life with moderate use, and they’re not waterproof, according to Facebook. The US$299 model has standard frames, while the companies will also offer a US$329 polarized model and a US$379 version with transition lenses. Prescription versions are coming, too.

The glasses have a physical switch on the inside to turn off the capture features, while they will also flash an LED light on the front so people know they are being recorded or in a photo.

In interviews, Facebook and Ray-Ban indicated it’s possible that the companies could eventually work together on AR versions of the glasses. They also said the partnership would expand to additional Ray-Ban styles and offerings from other Luxottica brands. Luxottica also owns the rights to Oakley, Chanel, Prada, Burberry and dozens of other name-brand glasses.