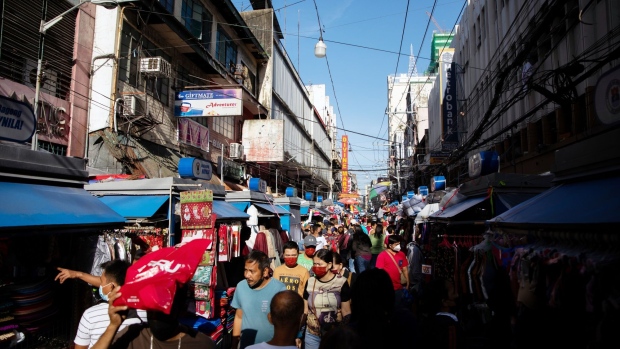 Shoppers walk past stalls at Divisoria Market in Manila, the Philippines, on Sunday, Dec. 5, 2021. The Philippines had loosened virus restrictions in recent weeks as Covid-19 infections declined but with the emergence of the virus variant however, Metro Manila will remain under Alert Level 2 to December 15 and the Southeast Asian nation has rolled back its reopening totourists. Photographer: Geric Cruz/Bloomberg , Bloomberg

(Bloomberg) -- Philippines’ inflation quickened further in November on higher food costs, boosting the case for the central bank to continue with its aggressive monetary tightening next week.

Consumer prices rose 8% from a year ago last month, the Philippine Statistics Authority reported Tuesday, faster than the 7.8% median estimate in a Bloomberg survey. That’s also the quickest since the 9.1% pace logged in November 2008, according to compiled data.

Price growth averaged 5.6% in the January-to-November period, way above the central bank’s 2%-4% target for 2022. Core inflation, which strips out volatile food and fuel items, rose 6.5% from a year ago last month.

Bangko Sentral ng Pilipinas “remains prepared to take all further monetary policy actions necessary” to bring inflation back to its target in the medium term, it said in a statement after the data release.

While risks to the inflation outlook remains titled to the upside for 2023, price growth is seen to decelerate in the coming months, BSP said. Monetary authorities were reassured of timely non-monetary actions by the government to cool persistent supply-side pressures, it said.

In what could be a sign of deceleration, inflation in the capital region slowed for the first time since July as food, utilities and fuel cost increases moderated.

“The government is continuously implementing targeted subsidies and discounts to allay the impact of the higher prices of essential goods,” Economic Planning Secretary Arsenio Balisacan said separately on Tuesday. It also has measures to boost food production, the planning chief said.

Inflation was expected to peak this month after policymakers embarked on their most aggressive monetary tightening in two decades to curb price pressures and support the peso. BSP Governor Felipe Medalla has flagged that the bank’s board may be split between a 25- or 50-basis points key policy rate increase on Dec. 15.

While the peso remains Southeast Asia’s worst performer this year, it has gained this quarter, along with most peers in the region. Philippine stocks halted a three-day loss and bucked a regional trend as banks rallied on rate hike expectations.