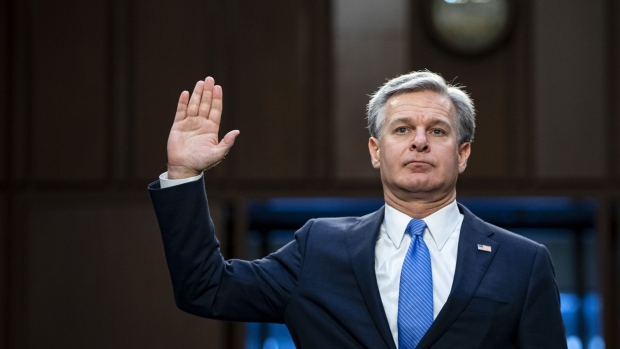 Christopher Wray, director of the Federal Bureau of Investigation (FBI), is sworn-in during a Senate Judiciary Committee hearing in Washington, D.C., US, on Thursday, Aug. 4, 2022. The hearing is titled "Oversight of the FBI." , Bloomberg

(Bloomberg) -- FBI Director Christopher Wray defended the actions his agents have taken as part of an investigation into former President Donald Trump’s handling of classified documents in response to heightened criticism and threats of violence.

“We don’t cut corners,” Wray said in an email obtained by Bloomberg News and sent last week to all FBI personnel.

“We ask the tough questions -- including of ourselves, making sure among other things that the investigative steps we take are measured and scrupulously consistent with our national security obligations and our role upholding the Constitution,” Wray wrote.

The FBI has come under intense political criticism for executing a search warrant -- approved by a federal judge -- on Trump’s Mar-a-Lago residence in Florida Aug. 8. The search is part of an investigation into whether the former president took classified documents from the White House when he left office. Agents retrieved more than two dozen boxes of documents, including some marked classified.

Since then, the FBI is confronting threats that don’t appear to be subsiding, including an armed man who attacked the bureau’s Cincinnati field office Aug. 11, the same day Wray sent his memo.

Wray  also said safety of his workforce is his primary concern and the FBI’s security division is working to stay vigilant and adjust procedures as needed.

“What I know -- and what I see -- is an organization made up of men and women who are committed to doing their jobs professionally and by the book every day; this week is no exception,” Wray wrote.

“As always, the way we maintain the trust and confidence of the American people isn’t by joining in the public commentary. We do it through our work,” he said. “By showing, when all the facts come out, we stuck to the process.”