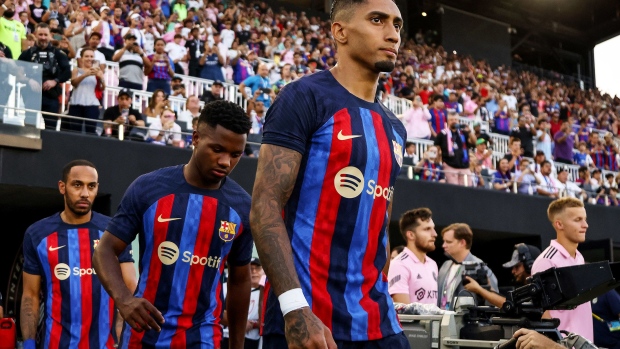 (Bloomberg) -- One of the biggest falls from grace in European football has been the financial meltdown at Barcelona. Yet, the club that global star Lionel Messi famously left because of the state of its budget is now back buying some of the continent’s most coveted players.

Barcelona has so far spent at least 153 million euros ($156 million) in the summer transfer window signing Brazilian winger Raphinha, Polish striker Robert Lewandowski and French defender Jules Kounde. That’s for a club laden with debt, losing money and with a negative net value based on the latest accounts available.

The comeback for a club that went from being a paragon of success to a byword for the unsustainability of the sport’s economics has raised eyebrows among its competitors as seasons get going in Europe. Barcelona was the only club to be told by Spain’s top league that it had to spend less money on the salaries of new players than it freed up from selling them.

Here is a look at how Barcelona is trying to rescue its beleaguered finances, and whether they are now viable.

What was the situation?

The pandemic and an uncontrolled surge in costs for three years left the Catalan club teetering. It reported debts and future liabilities of 1.35 billion euros, and had negative net value of 451 million euros in the 2020-21 season. It also recorded a 481 million-euro loss and applied a 155 million-euro cut to first-team payrolls last summer.

That meant Barcelona was only able to sign new players by cutting the current squad’s wage bill, increasing income or lowering expenses.

What did the club’s management do?

After a change of leadership in March last year, the club started to take more drastic action by offloading players and looking for extra sources of income. The club is expected to record a profit of about 100 million euros for the 2021-22 season, according to people familiar with the matter. They asked not be identified as the information isn’t public.

An extraordinary meeting of Barcelona members, who own the club, approved in June the activation of what President Joan Laporta called the “economic levers” the club needs to dig itself out further of the financial hole.

What about broadcast revenue?

Last year, the club declined to take part in a deal between CVC Capital Partners and LaLiga to buy a stake in an entity controlling the broadcasting revenue of Spain’s top league for 50 years. Instead, the club went solo and agreed to a 25-year deal with another finance company that didn’t dictate how much it could spend on players, repaying debt or investment.

San Francisco-based investment firm Sixth Street Partners bought 25% of Barcelona’s LaLiga media rights this summer in a transaction that will book the club a 667 million-euro gain. For the agreement to go through, Barcelona had to repay 125 million euros to bondholders to compensate them, the people familiar said. The club had sold 595 million euros of notes via a private placement arranged by Goldman Sachs last year.

That one-time boost, though, means the club will no longer receive 41 million euros per season from broadcasting rights. Barcelona has managed to offset that through other sales and commercial agreements, one of the people familiar with the club said.

What are some of those deals?

The club announced on Aug. 1 the sale of a 24.5% stake in its unprofitable Barcelona Studios, a content hub with capacity to build streaming services, to crypto platform Socios.com for $100 million. Management plans to sell another stake of the same size as soon as possible.

There are also plans to sell as much as 49.9% of Barça Licensing & Merchandising at a later stage. The club aims to raise more than 400 million euros, one of the people said.

On the sponsorship side, Barcelona signed in March a long-term agreement with Spotify Technology SA to name its stadium after the music streaming giant. The company’s logo will also appear on players’ shirts for the next four seasons. The terms of the deal weren’t disclosed. Barcelona-based daily La Vanguardia reported it was worth 280 million euros, one of the most expensive sponsorship deals in the world.

“One could argue that Barça is betting on short-term gains at the expense of long-term financial growth,” said Achille de Rauglaudre, investment manager at Rebel 54, a London-based company that invests in sports and technology. “But trying to see the glass half full, bringing in immediate financial resources, even if that means mortgaging future media rights revenue, could be the way to start a new virtuous cycle on the sporting side by assembling a highly competitive team.”

So it’s got money to spend?

Yes, as long as it sells too so it can reduce its wage bill. Barcelona has a player squad spending limit below zero. The club can only spend 25% of what it saves from transferring a player off its current wage bill, according to LaLiga’s financial fair play rules.

In the close season, Brazilian midfielder Philippe Coutinho, whose salary was among the team’s highest, was sold to English club Aston Villa, while his countryman Dani Alves’s contract expired. The team is also seeking to cut the salary of its Dutch star Frenkie de Jong, or to sell him.

As for its signings, which also include Ivorian midfielder Franck Kessie and Danish center back Andreas Christensen joining as free agents, Barcelona club has until Sept. 1 to show LaLiga that its finances are in line with the rules so the club can register its new talent.

What about its stadium?

Members also supported raising as much as 1.5 billion euros to renovate and further develop facilities at the iconic Camp Nou stadium, whose capacity of just shy of 100,000 makes it Europe’s biggest football arena.

The plan involves renovating the stadium as well as another venue used for other sports like basketball. Both facilities are in a precarious condition, forcing the club to fund regular repairs and pay fines for not meeting European competition requirements.

The club expects to generate 200 million euros of additional revenue annually after the revamp, and is planning a 35-year funding for the plan. In the 2023-24 season, the team will have to play at the Estadi Olimpic Lluis Companys, which hosted the 1992 Olympics and has capacity for about 60,000 people.

Is it all sustainable?

The plan will pay off only if the team performs well on the pitch and keeps qualifying for the Champions League, Europe’s top tournament, said Dan Plumley, a sports economist at Sheffield Hallam University. That would bring in up to 100 million euros annually. The team’s elimination at the group stage of the competition last season was its worst performance since 2000-01.

Barcelona is taking advantage of the market by “selling long-term revenue to generate short-term cash,” said Plumley. He described it as “quite a risky strategy.” While Barcelona executives acknowledge that, they argue the club has to make sure it has a top squad.