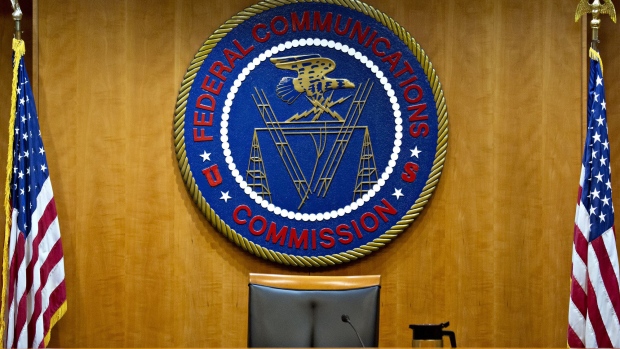 The Federal Communications Commission (FCC) seal hangs inside a meeting room at the headquarters ahead of a open commission meeting in Washington, D.C., U.S., on Thursday, Dec. 14, 2017. The FCC is slated to vote to roll back a 2015 utility-style classification of broadband and a raft of related net neutrality rules, including bans on broadband providers blocking and slowing lawful internet traffic on its way to consumers. Photographer: Andrew Harrer/Bloomberg , Bloomberg

The agency in a 5-0 vote also said it would establish a list of proscribed equipment, and it set up a program to reimburse carriers for replacing suspect gear that will start once Congress devotes an estimated $1.6 billion. The agency said the actions, which affect providers that take federal subsidies, implement a law Congress passed in March.

The FCC, Congress and President Donald Trump’s administration are confronting China on a range of issues including trade and the novel coronavirus. The FCC accuses Huawei and ZTE of posing a risk of espionage, an allegation each denies. Last year the agency said subsidies can’t be used to buy gear from Huawei or ZTE.

“The record on this is clear,” said FCC Commissioner Brendan Carr, a Republican. “The Chinese government intends to surveil persons within our borders, for government security, for spying advantage, as well as for intellectual property and an industrial or business edge.”

The restrictions ordered by the FCC affect mainly small carriers that often serve rural areas. Such companies need help to fulfill the requirements, rural lender CoBank said in a report filed last month with the FCC.

“Rural operators are desperately waiting for Congress” to appropriate money, according to the report by Greenwood Village, Colorado-based CoBank.

Several dozen rural carriers accept the subsidy and use equipment from Huawei or ZTE, the FCC has estimated. It said the average cost for a firm to replace the equipment may range from $40 million to $45 million.

Some Chinese investors expect that President-elect Joe Biden will tone down anti-China rhetoric heard from the White House under Trump, but not change what’s now a bipartisan view in Washington of Beijing as a strategic rival.