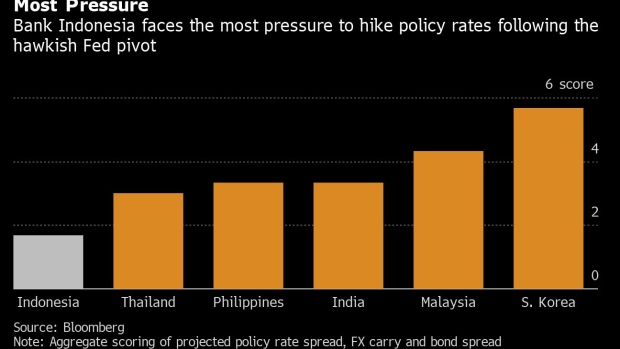 (Bloomberg) -- Bank Indonesia says its monetary policy doesn’t have to move in lockstep with the Federal Reserve’s. Metrics from currency carry to bond spread buffers paint a different picture.

Indonesia will face the most pressure to follow the Fed as U.S. policy makers hike to cool inflation in the coming months, according to Bloomberg’s analysis of six emerging Asian economies. That’s likely to further damp demand for rupiah sovereign debt, which suffered the biggest outflow in over a year last quarter.

Rupiah securities are at risk of reversing the 4% gain they recorded in 2021 as faster price pressures and volatility in global bonds cloud the outlook. Waning appetite for the notes may complicate the government’s efforts to finance a budget deficit that’s already coming under pressure from soaring energy prices.

Bank Indonesia’s policy stance will be affected by the Fed’s normalization pace, as “securing real yield differentials is imperative to sustaining currency and rates stability,” said Kiyong Seong, an Asia rates strategist at Societe Generale SA in Hong Kong. He now expects the central bank to hike rates in the second quarter versus third previously.

The spread on five-year rupiah bond yields over similar-maturity U.S. Treasuries has shrunk to around 350 basis points this week, bolstering the case for Bank Indonesia to deliver its first rate increase since 2018. The gap is 1.6 standard deviations below the five-year mean of 485 basis points.

The central bank will maintain its key rate at a record-low 3.5% until it sees definite signs of rising inflation, which are likely to emerge around the third quarter, Governor Perry Warjiyo said in December. Policy makers are expected to stand pat at a review on Thursday, according to all 29 economists in a Bloomberg survey.

Another factor in favor of a rate hike is the need to preserve the stability of the rupiah, which the central bank says is the most important factor for the local economy. The three-month implied carry of Indonesia’s currency over the London interbank offered rate has averaged around 3% over the past four weeks, close to one standard deviation below the five-year mean, and is the lowest among its peers.

In this regard, it may be worth noting that Bank Indonesia is unlikely to hike in the absence of a sharp drop in the rupiah. The currency has lost 2% versus the dollar in the past three months as higher U.S. yields boost the greenback’s appeal.

History also suggests Bank Indonesia will increase borrowing costs. The Indonesia-U.S. policy gap narrowed to 250 basis points in March 2018 after the Fed started hiking in 2016 while Bank Indonesia was in the midst of an easing cycle. The Southeast Asian economy responded by raising benchmark rates by a total of 175 basis points in 2018.

Economists surveyed by Bloomberg expect Bank Indonesia to lift rates by 25 basis points this year. As Fed fund futures are pricing in one percentage point of increases, the policy gap will shrink to 250 basis points, which is close to 2 standard deviations below the average since 2016. This represents the narrowest projected policy gap among emerging Asian economies.