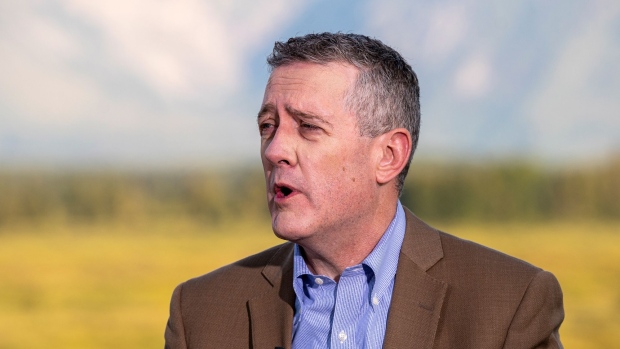 James Bullard, president and chief executive officer of the Federal Reserve Bank of St. Louis, speaks during a Bloomberg Television interview at the Jackson Hole economic symposium in Moran, Wyoming, US, on Friday, Aug. 26, 2022. Federal Reserve officials stressed the need to keep raising interest rates even as they reserved judgment on how big they should go at their meeting next month. , Bloomberg

(Bloomberg) -- Federal Reserve officials reiterated Thursday that they will keep raising interest rates to restrain high inflation, and that markets are now understanding the message.

“If you look at the dots, it does look like the committee is expecting a fair amount of additional moves this year,” St. Louis Fed President James Bullard told a virtual emerging-market forum, referring to the bank’s so-called dot plot of projections. “I think that that was digested by markets and does seem to be the right interpretation.”

He also said that volatility in financial markets reflected spillovers from recent events in the UK -- where the new government’s fiscal measures have seen the pound plummet -- but made clear that these would not cause the Fed to pause its tightening campaign.

“We’re determined to get to the right level of the policy rate in order to put meaningful downward pressure on inflation here,” he told reporters via telephone conference call following his speech.

“This is mostly about financial markets needing to price in the volatility that you’re seeing in the UK so we have some movements in the US because of that,” he said. “I don’t see this really impinging on the US inflation or real growth developments.”

His hawkish stance was in line with the message from Cleveland Fed chief Loretta Mester, who said that officials are resolute in their quest to increase rates to a level seen as restrictive. Both officials are voters this year on the rate-setting Federal Open Market Committee.

“Real interest rates -- judged by the expectations over the next year of inflation -- have to be in positive territory and held there for a time,” she said earlier in an interview on CNBC. “We’re still not even in restricted territory on the funds rate.”

Asked in a later panel discussion if a US recession would stay her hand in terms of raising interest rates, Mester said: “We’re going to do what we have to do to get the price stability. So -- no.”

Fed officials raised interest rates by 75 basis points on Sept. 21 for the third straight meeting, bringing the target for the benchmark federal funds rate to a range of 3% to 3.25%.

Their quarterly Summary of Economic Projections, or dot plot, shows a median forecast of rates reaching 4.4% by the end of this year, implying a further 1.25 percentage points of tightening over their remaining two meetings in November and December.

Mester said her forecast is probably a bit above the median path because she sees inflation being persistent, based on her conversations with businesses, community development groups and other sources.

“In my SEP I have inflation coming down, but we have to bring interest rates up to get that downward shift in inflation,” she said, adding that the US economy has so far been able to handle the higher interest rates.

She drew a distinction between US markets and what is happening in the UK, where the Bank of England announced Wednesday that it would launch unlimited bond buying to address market dysfunction. When the Fed announced its bond purchases in the early months of the pandemic, it did so at a time when it was also lowering rates to support the economy, she said.

The BOE faces some communication issues because it is lifting rates but needed to purchase assets, which is typically viewed as a method for easing monetary policy, in order to support financial stability, Mester said.

“It’s a challenging situation for them,” Mester said. “For financial stability reasons and for market functioning reasons they had to go in and buy bonds.”

“Market functioning is incredibly important because you won’t be able to hit any monetary policy goals if the markets aren’t functioning,” she said. “That’s different than worrying about volatility in the markets.” Mester said that so far, there had been no sign of dysfunction in US financial markets.