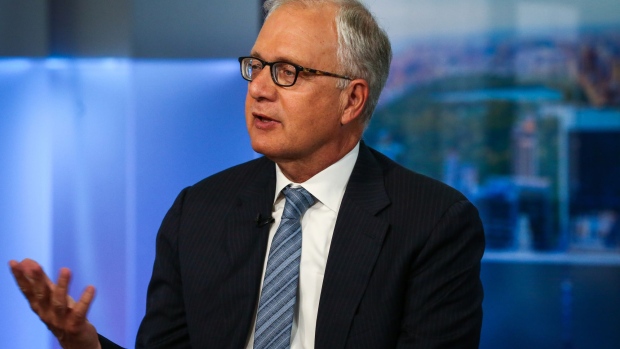 (Bloomberg) -- Things are already breaking in financial markets, as signaled by a relentless rally in the dollar, and the Federal Reserve should consider stopping its tightening campaign after one more interest-rate hike in November.

That’s the view from Ed Yardeni, a market veteran who coined terms like “Fed Model” and “bond vigilante.” The stress in financial markets from big rate increases, a surging dollar and quantitative tightening through the Fed’s reducing its bond holdings has reached the point that policy makers should make financial stability the top priority, says the president of Yardeni Research.

“I’m totally stumped, mystified, surprised that Fed officials do not seem to acknowledge that just focusing on the Fed funds rate, which is a part of the monetary tightening cycle, is a mistake,” Yardeni told Bloomberg Television’s Surveillance on Monday.

“When you also have QT2 and a soaring dollar, there are very restrictive monetary developments,” he added. “I think they have one more rate hike coming in November and that will be it, because the financial stability issue will pop up as a primary concern.”

The Bank of England’s dramatic market intervention last week to stem a collapse in the British pound and UK government bonds is likely to be repeated, Yardeni warns. The dollar’s rally to a two-decade high has tightened financial conditions for a slew of borrowers in the developed and emerging world, while causing Japan to intervene to support the yen for the first time since 1998.

“The soaring dollar has been associated in the past with creating financial crisis on a global basis. We have to have a global perspective on this,” Yardeni said. “What the Bank of England did was a template for what others are likely to do.”

Stocks bounced back Monday after a brutal September, while Treasury yields retreated. The S&P 500 last week took out its previous bear-market low reached in June, defying Yardeni’s forecast in July that shares had already bottomed.

The latest leg down reflected concerns that an aggressive Fed would thrust the economy into a serious recession, according to the economist.

“A hard landing isn’t currently our economic forecast -- we see the growth recession continuing through year-end. But fears of a Fed-induced hard landing are increasing bearishness in both bond and stock markets,” Yardeni wrote in a note. “We are assessing whether our forecasts for both S&P 500 earnings and valuation might be too optimistic.”