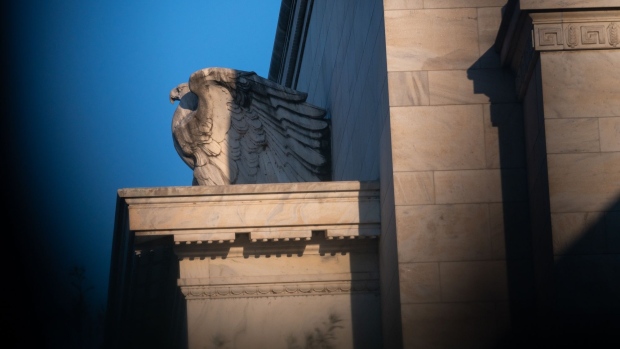 (Bloomberg) -- Federal Reserve officials are starting to get what they want from the economy, but the bar for any “pivot” toward a less-aggressive monetary policy tightening path is probably still high.

The Reserve Bank of Australia surprised investors Tuesday with a smaller-than-expected interest-rate increase, helping fuel a global rally in stocks amid hopes other central banks would soon follow. And a monthly US Labor Department report on job openings suggested labor demand is beginning to recede -- a key development the Fed has been waiting to see.

Even so, top officials at the US central bank are warning that the fight against inflation will require more time. And they aren’t giving any hints that a similar down-shift could come at their next policy meeting on Nov. 1-2.

Two key indicators -- Friday’s monthly payroll report and monthly consumer prices on Oct. 13 -- could still affect that message, but both data series lately have shown sustained wage and price increases. A surging dollar that stokes financial-stability worries looms as another what-if. But for now the course seems clear.

“I think it’s way too early,” said Aneta Markowska, the chief US financial economist at Jefferies in New York. “We haven’t heard anything from the Fed suggesting that they are even getting close to considering a pivot.”

The Fed on Sept. 21 raised its benchmark rate by an outsize three-quarters of a percentage point for the third time in a row and signaled another such hike was likely in November. And despite plenty of turmoil in financial markets since then, investors are still betting the central bank will follow through, according to futures contracts linked to the benchmark.

That expectation has been fueled by a steady drumbeat of commentary from Fed officials since then, suggesting that they won’t be backing off anytime soon.

Fed Governor Philip Jefferson, in his first public remarks since joining the central bank in May, said Tuesday that “restoring price stability may take some time and will likely entail a period of below-trend growth,” and expressed concerns that high inflation could feed into household inflation expectations, even though they remain “well-anchored” now.

His comments echoed similar remarks from New York Fed President John Williams on Monday, who was more pointed in answers to questions from reporters after a speech in Phoenix: He said interest rates are “not yet in a restrictive place for growth,” and argued that policy makers “still have a significant ways to go” to get them there.

The next thing that has the potential to prompt some reconsideration of the near-term trajectory for interest rates may be September jobs data, due out Friday. The last report showed a surprise jump in the labor force participation rate, an indication the long-awaited return of workers who dropped out early in the pandemic may finally be underway.

If that continues, it could bolster the case for a slower pace of rate increases, because it would suggest rising supply can do more work to ease inflationary pressures, and a monetary policy program aimed at demand suppression can do less.

At the moment, though, most forecasters don’t see that dynamic repeating. Expectations are for the labor force participation rate to remain unchanged at 62.4% for September, according to the median forecast in a Bloomberg survey.

And given the pessimism toward labor supply, Markowska said it would probably take a sharp drop in job creation, to something below 100,000, for the Fed to consider a smaller rate hike in November. The median projection for September is for a 263,000 rise in payrolls.

Even more important will the consumer price index, due out on Oct. 13. A pickup in so-called core CPI, which excludes food and energy prices, has been a major cause for concern among Fed officials.

Without substantial moderation in core inflation in the September numbers -- something few forecasters currently anticipate -- the Fed will probably forge ahead with hefty rate increases.

“The demand for durable goods remains very high -- beyond what can be produced and brought to market, even with improved supply chains,” Williams said in his speech Monday. “And the demand for labor and services is far outstripping available supply. This is resulting in broad-based inflation, which will take longer to bring down.”