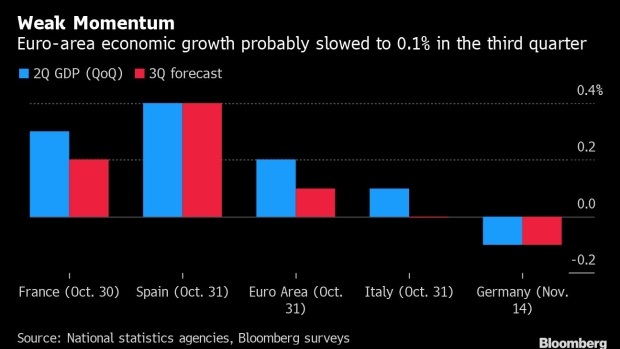 (Bloomberg) -- Federal Reserve Chairman Jerome Powell is expected to deliver the third straight U.S. interest rate cut this week -- but the real news will be if he signals the end of the easing cycle or leaves the door open for more.

Recent U.S. economic data has been mixed, with weakness among manufacturers contrasting with resilient consumers who contribute the lion’s share to national output.

Who’s Who on the Fed’s Dot Plot?

There are also central bank decisions in Japan, Canada, Brazil and Colombia, and the first estimate of third-quarter GDP in the euro area. Data watchers: don’t forget the clocks go back in Europe this weekend.

“The Federal Reserve will not take any chances this week by defying market expectations for additional accommodation -- we expect the central bank to deliver a third consecutive rate cut at the FOMC meeting. Had policy makers held strong reservations against the anticipated move, Fed Chair Jerome Powell and Vice Chair Richard Clarida would have pushed back against it in remarks prior to the blackout period; they chose not to.”

Here’s what happened last week and below is our weekly wrap of what’s going on in the world economy this week.

The Fed’s decision on Wednesday comes hours after U.S. GDP data is expected to show another slowdown in the third quarter. Investors see another quarter percentage point move when policy makers wrap up their two-day gathering, yet only price in one more reduction over the following six months

President Donald Trump has repeatedly made clear he wants lower borrowing costs, and he continued the pressure last week, saying that the Fed would be “derelict in its duties” if it doesn’t cut further. However, if Powell sticks with his oft-repeated line that the domestic economy is hanging in there, and the cuts are insurance against trade uncertainty and weakness abroad, it will probably solidify views that Fed has put policy on hold.

Meanwhile, the Bank of Canada, the Group of Seven’s most dovish central bank, is expected to keep on resisting looser monetary policy at a rate decision Wednesday.

It’s Mario Draghi’s last week as European Central Bank president before he hands over to Christine Lagarde, and both are due to speak at a farewell event for the outgoing chief on Monday.

That’s before a hectic few days, with third-quarter GDP due from France, Italy, Spain, Austria and Belgium. There’s also a first estimate for the euro zone, forecast to record just 0.1% growth, as well as confidence and inflation numbers for October. But we have to wait another two weeks for German GDP, and confirmation of whether Europe’s largest economy is or isn’t in a technical recession.

Turkey’s central bank governor will face investors when he presents the quarterly inflation report on Thursday, after cutting interest rates by a cumulative 1,000 basis points in his past three meetings. In the Gulf, an outlier to the central banks following the Fed could be Kuwait: it may ease as pressure builds on bank funding costs and economic growth is forecast at just above zero.

The Bank of Japan is set to lower its forecasts for economic growth and inflation this year in a quarterly outlook report to be released at the end of a policy meeting on Thursday. But that may be where the excitement ends. Governor Haruhiko Kuroda’s call in September for a review of how its mission to stimulate price growth could be threatened by the global slowdown spurred speculation that October would be the month for policy action, yet the need to ramp up stimulus still isn’t clear-cut.

In China, the first numbers from the fourth quarter will be released when the official PMI report for October is released on Thursday.

Brazil is expected to deliver a third straight 50 basis-point cut to its benchmark interest rate on Wednesday, lowering borrowing costs to an all-time low of 5%, as inflation runs below the floor of the central bank target and the recovery falters for a third consecutive year.

Also Wednesday, GDP from Mexico will show Latin America’s second largest economy picking up some speed in the third quarter, but still constrained by trade tensions and investor unease over the policies of President Andres Manuel Lopez Obrador. A day later, Colombia’s central bank is forecast to hold interest rates at 4.25% for a 12th meeting, one of the few Latin American central banks that have yet to join the monetary easing bandwagon.

To contact the editors responsible for this story: Craig Stirling at cstirling1@bloomberg.net, Zoe Schneeweiss