The Federal Reserve’s balance sheet will probably peak at a smaller size than previously expected due to improved trading conditions in financial markets and low demand for the U.S. central bank’s COVID-19 emergency lending programs.

Weekly figures published Thursday showed the size of the Fed’s balance sheet fell for a fourth straight week, bringing it back below US$7 trillion. From early March to mid-June, it expanded by US$3 trillion as central bankers pumped cash into the financial system via short-term loans and purchases of debt securities to alleviate investor panic as the virus spread.

“Balance-sheet estimates are largely coming down because backstop programs aren’t being utilized to as much of an extent as people may have expected,” said Blake Gwinn, a rates strategist at NatWest Markets. 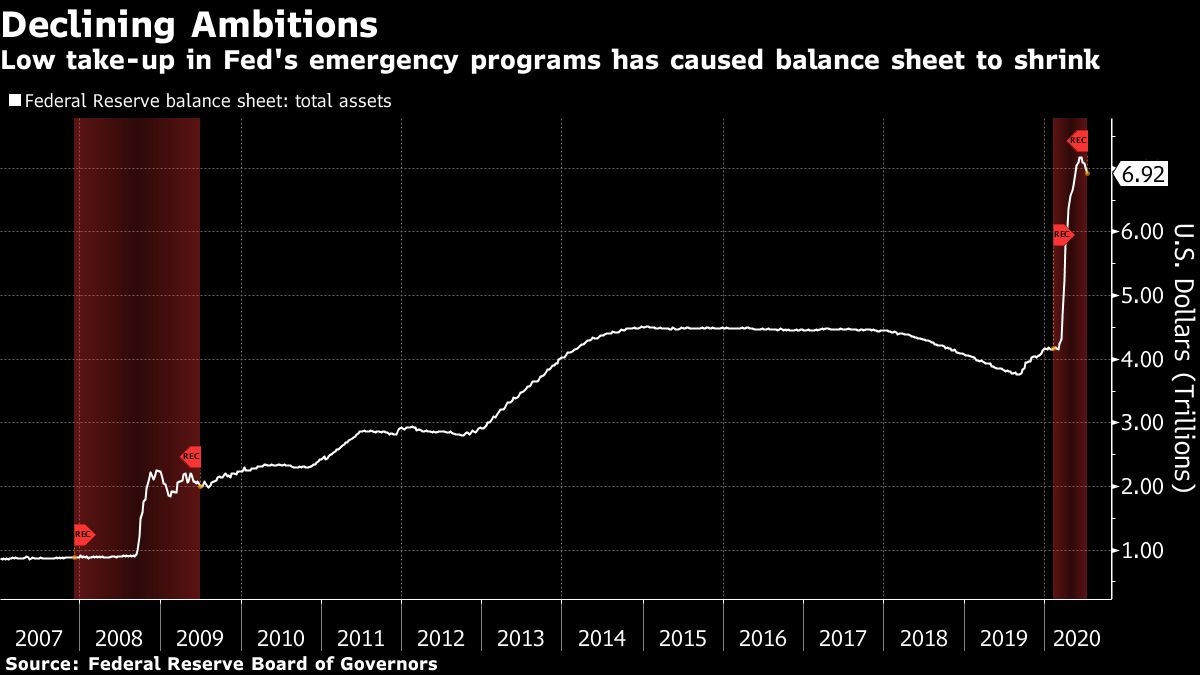 The short-term loans are now coming due and borrowers — mainly dealer banks and foreign central banks — aren’t rolling them over as market conditions return to a more-normal state. At the same time, the spate of unprecedented emergency lending programs the Fed launched to backstop corporate and municipal borrowers over a longer period in response to the pandemic aren’t seeing much take-up so far.

Andrew Hollenhorst, chief U.S. economist at Citigroup Inc., now sees the Fed’s balance sheet peaking around US$8 trillion in the coming months instead of US$9 trillion. Mark Cabana, a rates strategist at Bank of America Corp., said he expects the balance sheet to rise to US$7.6 trillion by the end of the year instead of US$10 trillion.

Hollenhorst and Cabana cited a decline in the amount of foreign-exchange swaps outstanding with the U.S. central bank’s counterparts abroad, which by the end of May had risen to US$449 billion but have since fallen to US$179 billion.

Both also pointed to the lack of take-up in the Fed’s so-called Main Street Lending Program for mid-size U.S. companies, which was announced in March but didn’t launch until Monday. The weekly balance-sheet data showed that as of Wednesday, the Fed hadn’t purchased any loans made by banks under the program, which has US$600 billion in lending capacity.

Another emergency program for state and local governments known as the Municipal Liquidity Facility, which has $500 billion in lending capacity, has so far only disbursed a single loan — for US$1.2 billion, to the state of Illinois.

The Fed has to date accumulated US$10.7 billion of corporate debt through its emergency program to backstop the market where larger companies borrow. But the US$710-million increase over the past week marked the smallest rise since the Fed began making purchases in that market in mid-May.

“As market functioning has improved, we have slowed the pace of purchases, from about (US)$300 million per day to a bit under (US)$200 million a day,” Daleep Singh, head of the markets group at the New York Fed, said Wednesday.