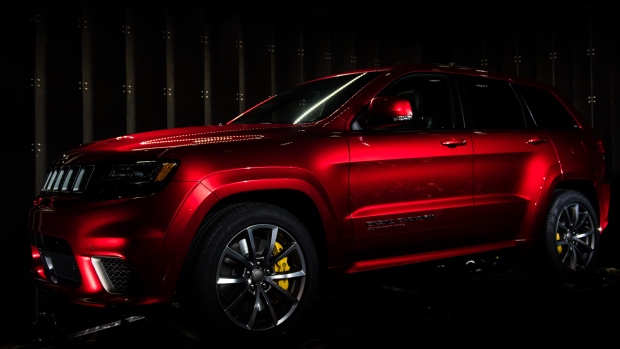 The Italian-American automaker is putting US$1.6 billion into its Mack Avenue engine plant in Detroit to produce the next-generation Grand Cherokee, plus a new full-size three-row Jeep with an optional plug-in hybrid engine, Chief Executive Officer Mike Manley said on a call with reporters. It’s also spending US$1.5 billion on its Warren, Michigan, truck plant to bring back the Jeep Wagoneer and Grand Wagoneer nameplates, and continue production of its Ram 1500 Classic truck through this year.

Those models will hit the market at a time when crosstown rivals General Motors Co. and Ford Motor Co. are relaunching storied nameplates including the Ford Bronco and Chevy Blazer. An unexpected spike in inventory of Jeep’s iconic Wrangler already is stoking concern that the American SUV boom fueling Detroit automakers’ profit growth is reaching its limits. In an early sign of this potential strain, Fiat Chrysler said later Tuesday that it’ll cut a shift at its Jeep plant in Illinois to align production with demand.

Manley downplayed these concerns on a call with reporters. Entering segments where the company doesn’t have an offering -- such as with the three-row SUV and the Grand Wagoneer -- will allow Fiat Chrysler to keep growing, he said. The automaker’s U.S. shares dipped as much as 0.7 per cent after the announcements.

“Even if we see mitigation in the industry in the coming years, entering white space” will expand the addressable market, Manley said. “Notwithstanding the fact that the industry is going to be, in total, slightly down year-over-year, the economic indicators as we see them are still strong.”

Fiat Chrysler was the only one of Detroit’s three automakers to increase sales in a flat U.S. market last year, thanks to record deliveries for its Jeep and Ram brands. The company is looking to build on that momentum in 2019 with redesigned heavy-duty Ram trucks and the new Jeep Gladiator pickup being introduced in the first half of the year.

Still, Fiat Chrysler hasn’t been completely immune from the broader auto market’s slowdown. It started this month with 166 days’ supply of Jeep Wranglers on dealer lots, almost double the inventory of cars and light trucks in stock industrywide. The company said its Jeep Cherokee plant in Belvidere, Illinois, will move to two shifts, from three, starting May 6, leading to indefinite layoffs for 1,371 workers.

The National Automobile Dealers Association expects industrywide deliveries to dip to 16.8 million cars and trucks this year, down from about 17.3 million in 2018. As the market shrinks, showrooms are getting more crowded with new models. Researcher LMC Automotive projects automakers will offer 191 different SUVs by 2024. That’s up from just 100 in 2014.

Fiat Chrysler is filling out its Jeep lineup to bolster profits after margins in North America fell short of investors’ expectations in the fourth quarter, prompting a stock plunge and slew of analyst downgrades. The company is counting on U.S. sales to sustain earnings while it seeks partners to help cut costs for its ailing European business. It’s also struggling to find its footing in a slowing Chinese market and shore up the Maserati luxury brand.

“They’re more reliant than ever on the good mix in the U.S. and North America in general to offset the foreseeable weakness in Europe and China,” said Pierre Quemener, an analyst at MainFirst Bank AG. “If they falter here, that’s going to be a big issue for them.”

Before today’s announcement, the company had spent US$4.9 billion on truck and SUV assembly in the U.S. since 2009, compared with US$1.3 billion on passenger cars, according to the Center for Automotive Research.

The investments have helped Fiat Chrysler curry favor with President Donald Trump. The White House has attacked GM for its plans to close factories as it kills off some sedans and frees up resources to invest in electrification and autonomous vehicles.

Fiat Chrysler won plaudits from Trump in January 2017 when it announced a US$1 billion investment to build three new Jeeps and shift production of the heavy-duty Ram pickup from Mexico. But Manley said Tuesday the truck’s planned exit from Mexico has been scrapped.

“At a time when the Detroit area and our communities have seen auto plants without work and companies continue to ship vehicles into the U.S. from Mexico, China, Korea and other countries, it’s exciting to see now that we can have good union jobs here,” Cindy Estrada, a UAW vice president, told reporters at a press conference.