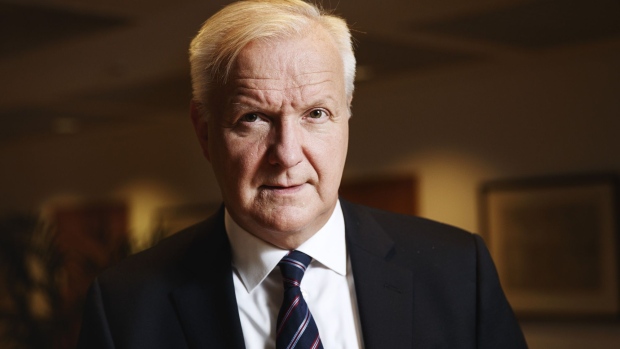 The European Central Bank (ECB) headquarters stand illuminated at night in Frankfurt, Germany, on Monday, June 29, 2020. A broad coalition of ruling and opposition parties in Germany has agreed on a draft motion to back the European Central Bank’s bond buying program, according to officials familiar with the accord, likely ending a standoff that was triggered by the country’s constitutional court last month. Photographer: Alex Kraus/Bloomberg , Bloomberg

(Bloomberg) -- The final chance for more than half a decade to reshape the European Central Bank’s inner sanctum of policy making will soon spark a tussle for influence between the region’s smaller countries.

The vacancy on the six-person Executive Board that the departure of Luxemburg’s Yves Mersch will create in December will be the last one available until 2026. The contest to fill it will end a round of appointments that included Christine Lagarde’s groundbreaking elevation as the ECB’s first female chief.

With citizens of all four of the region’s biggest economies already on the board, Mersch’s succession offers a rare prize to the rest. That could provide a historic opening for governments in the bloc’s East from Slovenia to Estonia to win their first ever seat, or for others from the Netherlands to Finland to clinch a second shot.

While key decisions are officially taken by 25 members of its Governing Council, it’s up to the president and the Executive Board in Frankfurt to set the policy agenda.

Board members serve in a personal capacity and should be “persons of recognized standing and professional experience in monetary or banking matters,” according to the ECB statute. Specific strengths for this job might include expertise in supervision to replace Mersch as vice chair of the institution’s watchdog for lenders, as well as being female and knowing about green finance to aid Lagarde’s priorities on diversity and the environment.

“It’s clear that the appointment will have to come from a small country,” said Nicolas Veron, a senior fellow at the Peterson Institute for International Economics in Washington. “It’s potentially very important for Lagarde, because as the situation with Covid showed, the monetary policy side and supervision need to work and communicate closely.”

Euro-zone finance ministers will make the choice in coming months, and behind-the-scenes jostling has already started. Here are some names of possible candidates emerging early on in the race to join Lagarde’s top team, based on conversations with officials and observers with knowledge of the process.

The Netherlands provided the ECB’s first president, Wim Duisenberg, but hasn’t had an Executive Board member since he left 15 years ago: a long enough gap perhaps to allow a claim for another turn.

One potential candidate could be Frank Elderson, 50, who already sits on the board of the ECB’s watchdog for lenders in his role running banking supervision at the Dutch central bank. He is also chairman of the Network of Central Banks and Supervisors for Greening the Financial System, a group of 66 mostly European institutions aiming to address climate change.

Another possibility is Joanne Kellermann, 59, who was the first female board member at the Netherlands central bank, where she monitored banks during the global financial crisis. She then served at the Single Resolution Board, responsible for winding up lenders in Germany and Italy. She is currently the chairwoman of a Dutch pension fund.

Any candidate might encounter resistance from countries unimpressed by the Netherlands’ role as the region’s chief foot-dragger in creating its new coronavirus-inspired recovery fund. Winning a board seat could also hurt the chances of central-bank Governor Klaas Knot to replace Lagarde when her term ends in 2027.

No Eastern European citizen has yet served on the ECB’s board, so whatever the outcome, the appointment process has symbolic significance in that part of the region.

One contender there could be Bostjan Jazbec, 50, who led Slovenia’s central bank but quit early amid controversy over a decision to wipe out investors in a 3.2 billion-euro ($3.8 billion) rescue of failing lenders. As an ex-governor from a country that suffered a banking crisis, he could bring expertise in both monetary policy and supervision. Since 2018, he has been at the Brussels-based SRB, where he oversees planning for winding up banks.

Alternatively, Peter Kazimir, 52, is a former Slovak finance minister who has led his country’s central bank for just over a year. That makes him a relative monetary novice, though he can offer useful experience of the euro-zone debt crisis from his previous role.

Along with the rest of Eastern Europe, Estonia, Latvia and Lithuania have never had an ECB Board seat. Their best chance of changing that could be Ardo Hansson, 62, who ran Estonia’s central bank until last year.

A Chicago-born son of Estonian immigrants with a doctorate from Harvard, he was formerly the World Bank’s lead economist for China. If Hansson pursues the job, he could carry the support of all three Baltic countries, though a money-laundering scandal that hit Estonia in his final year as governor might cast a shadow over his potential candidacy.

Like the Netherlands, Finland also had a board member at the birth of the euro, but not since 2003. For Bank of Finland Governor Olli Rehn, 58, clinching a board seat might be third-time lucky after he lost out to Lagarde for the ECB’s top job, and then failed to get her previous role leading the International Monetary Fund.

The former European Union Commissioner for Economic and Monetary Affairs could be happy with the influence of his current job however: he was the first ECB policy maker to call for the strategy review, which Lagarde then established this year.