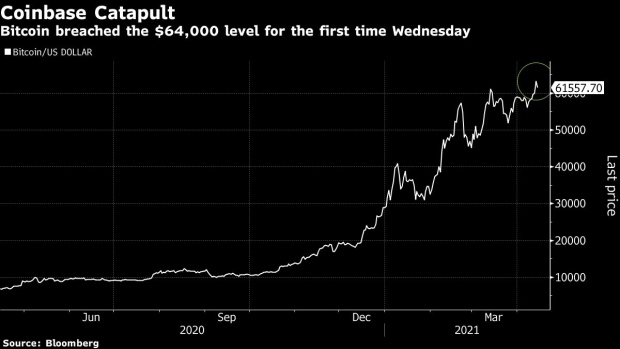 (Bloomberg) -- Canada is once again beating the U.S. in a Bitcoin milestone, as the first inverse Bitcoin exchange-traded fund will debut Thursday on the Toronto Stock Exchange.

While regulators south of the border hold off approving any ETFs that track the cryptocurrency, Horizons ETF is releasing a fund (ticker BITI) that will allow investors to take short positions on Bitcoin futures, according to a statement.

“Many investors have a view on Bitcoin and this new ETF will provide an opportunity for those that believe the current price is not justified and that Bitcoin is overdue for a correction,” said Todd Rosenbluth, director of ETF research for CFRA Research.

The launch comes as applications for a standard Bitcoin ETF pile up in the U.S., with at least eight firms throwing their hat in the ring, including Fidelity Investments Inc. and Galaxy Digital Holdings Ltd. The firm that gains first approval is likely to see huge demand, prompting issuers to press ahead with proposals despite ongoing regulator reluctance.

Since 2013, the SEC has rejected every Bitcoin ETF application, citing concerns about manipulation and criminal activity. Meanwhile, Canadian regulators have proved more lenient than the U.S. by granting approvals for ETFs tracking Bitcoin, blank-check companies, psychedelics and marijuana. The first Bitcoin ETF in North America launched less than two months ago in Toronto and has already reached $1 billion (C$1.25 billion) in assets.

Horizon’s BetaPro Inverse Bitcoin ETF will provide up to 100% the inverse daily performance of an index that, according to the statement, “replicates the returns generated over time through exposure to long notional investments in Bitcoin futures.” It will charge a 1.45% management fee, while a sister product called BetaPro Bitcoin ETF (HBIT), also debuting Thursday, will cost 1.00% and track Bitcoin futures.

“Buying HBIT and BITI is as easy as buying any stock or other ETF through a broker, and doesn’t require investors to open up separate cryptocurrency accounts,” said Steve Hawkins, chief executive officer of Horizons ETFs, in the statement. “Additionally, BITI will offer a way for investors to achieve ‘short’ exposure to Bitcoin without having to use a margin account or shorting futures.”

The cryptocurrency breached the $64,000 level for the first time on Wednesday, on cryptocurrency exchange Coinbase Global Inc.’s first day of trading. Bitcoin fell back to around $62,100 as of 4:15 p.m. in New York.