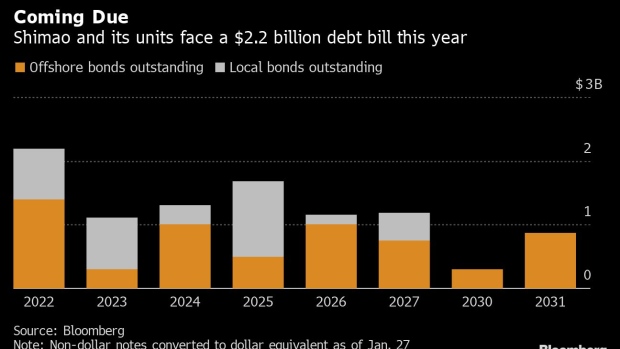 A developer once regarded as among China’s strongest is now prompting investors to doubt that such legacies will be enough to help builders weather a worsening industry crisis.

Shimao Group Holdings Ltd. tumbled to a single B borrower in a matter of weeks and its dollar bonds have lost about half their value. Its notes are indicated at distressed levels at around 50 cents on the dollar, even after a recent broader sector rebound and a report that it put $12 billion of assets up for sale.

It now faces fresh scrutiny: holders of its syndicated loans have reportedly requested that Deloitte assess the firm.

Shimao’s liquidity struggles, which include signs the builder is struggling to keep up with asset-backed securities obligations, are significant. Only months ago it was viewed as being in a better position than most other private developers. With better access to funding, such firms were perceived to be more insulated from a crisis sparked by a government crackdown on excessive borrowing by builders.

Shimao Group is China’s 14th biggest developer by contracted sales, according to China Real Estate Information Corp. Its among the nation’s largest property debt issuers, with about $9.8 billion in outstanding local and offshore bonds. It develops residential, hotel, office and commercial properties, according to its website.

The firm had passed all of the so-called three red lines -- metrics introduced to curb borrowing among developers -- according to Bloomberg-compiled data including first-half results. That would typically suggest a more robust financial position, but S&P Global Ratings says its liquidity has significantly worsened.

Shimao is facing fresh worries about its financial health after Debtwire reported that the developer’s offshore syndicated loan holders requested Deloitte conduct an independent financing assessment. That dragged down its dollar bonds.

Delayed repayment on at least $183 million of asset-backed securities also prompted concerns the borrower may seek extensions on its other debt obligations. Shimao and its subsidiaries have $2.2 billion in local and offshore debt coming due this year, including a $1 billion dollar note that will mature in July, according to data compiled by Bloomberg.

Credit assessors have repeatedly slashed their views on Shimao, pushing the borrower into so-called fallen angel territory. The firm was rated investment-grade by S&P Global Ratings as recently as November, before being cut to B- and being finally withdrawn by S&P at Shimao’s request.

A share placement and the pledge of its Shanghai headquarters for financing have done little to assuage concerns over Shimao’s financial health. Its offshore bonds are at levels that imply investors are pricing in a rising risk of default, while notes onshore have traded at a discount since the middle of last year.

Shimao’s billionaire founder Hui Wing-Mau’s personal fortune has tumbled by more than 42% to about $4.4 billion since the beginning of last year, according to data compiled by Bloomberg. Shares in the firm have plummeted about 78% in that time, as of Friday’s close.

Shimao Group and its services unit were cut to underweight by JP Morgan in mid-December after its Shanghai-listed subsidiary announced the sale of its property management assets to Shimao Services-- calling it a “corporate governance red flag” that implied tight liquidity.

Why does it matter?

Some investors consider the potential collapse of Shimao to pose a much bigger threat to the offshore credit market than the crisis at beleaguered property giant China Evergrande Group. Shimao’s recent status as a ‘safer’ property firm once made its dollar bonds popular among global investors.

A collapse would risk triggering contagion and accelerate a wave of property defaults that last year reached a record high. Volatility remains at a time when even the strongest credits are struggling to tap capital markets for liquidity or refinancing needs.

Shimao did not immediately respond to a Bloomberg request for further comment.

What do credit rating firms say?

Shimao is facing heightened refinancing risks due to still-tight regulatory conditions, according to a ratings report by S&P in January. “We don’t believe the company will be able to access capital markets in the next six months given the volatility in prices of its capital market instruments, both domestically and offshore,” analysts wrote in a Jan. 10 note when cutting its credit rating to B-.

“Shimao’s liquidity has significantly deteriorated--the decline is worse than we previously anticipated,” analysts noted before withdrawing the rating three days later at the issuers request.

The firm is on watch for further downgrade. It holds a B2 and B- rating at Moody’s Investors Services and Fitch Ratings respectively.

What are traders watching for next?

The next test is whether the developer will repay or attempt to delay payments on its sizable upcoming debt obligations.

Since Chinese developers are facing mounting difficulties to refinance their existing debt, asset disposal appears to be the most feasible way of raising funds. Market participants are watching the progress of asset sales closely for whether deep discounts will be involved.

Investors are also seeking clues of regulatory direction on the sector, as analysts believe China’s real estate industry may not fully recover without further policy easing measures such as lowering mortgage rates and removing home-buying restrictions.