We're in the very early stages of a reflationary trend: Money manager

The retail trading boom left Canadian asset manager IGM Financial Inc. with a windfall. Chief Executive Officer James O’Sullivan has several ideas on what to do with it.

IGM ended the second quarter with $583 million (US$466 million) in unallocated capital, a pile that grew substantially in May when it sold part of its stake in online brokerage Wealthsimple Inc. The company now wants to bolster other areas, including services for wealthy investors and funds that focus on environmental, social and governance factors, O’Sullivan said in an interview.

Both are relatively small lines of business for IGM, which oversees $262 billion in assets. More than half of the company’s profit comes from a division that includes about 4,000 financial advisers, many of whom focus on clients with less than $1 million. It’s trying to move upmarket and is interested in firms that provide advice to investors with seven-figure portfolios, the CEO said.

“There’s more for us to do, particularly in the high net worth space,” O’Sullivan said. “If confidence holds, I think we’re going to see a generation of founders of businesses -- private investment counselors and the like -- look, potentially, to sell. And to the extent they do, we will be there and we’ll express interest.” 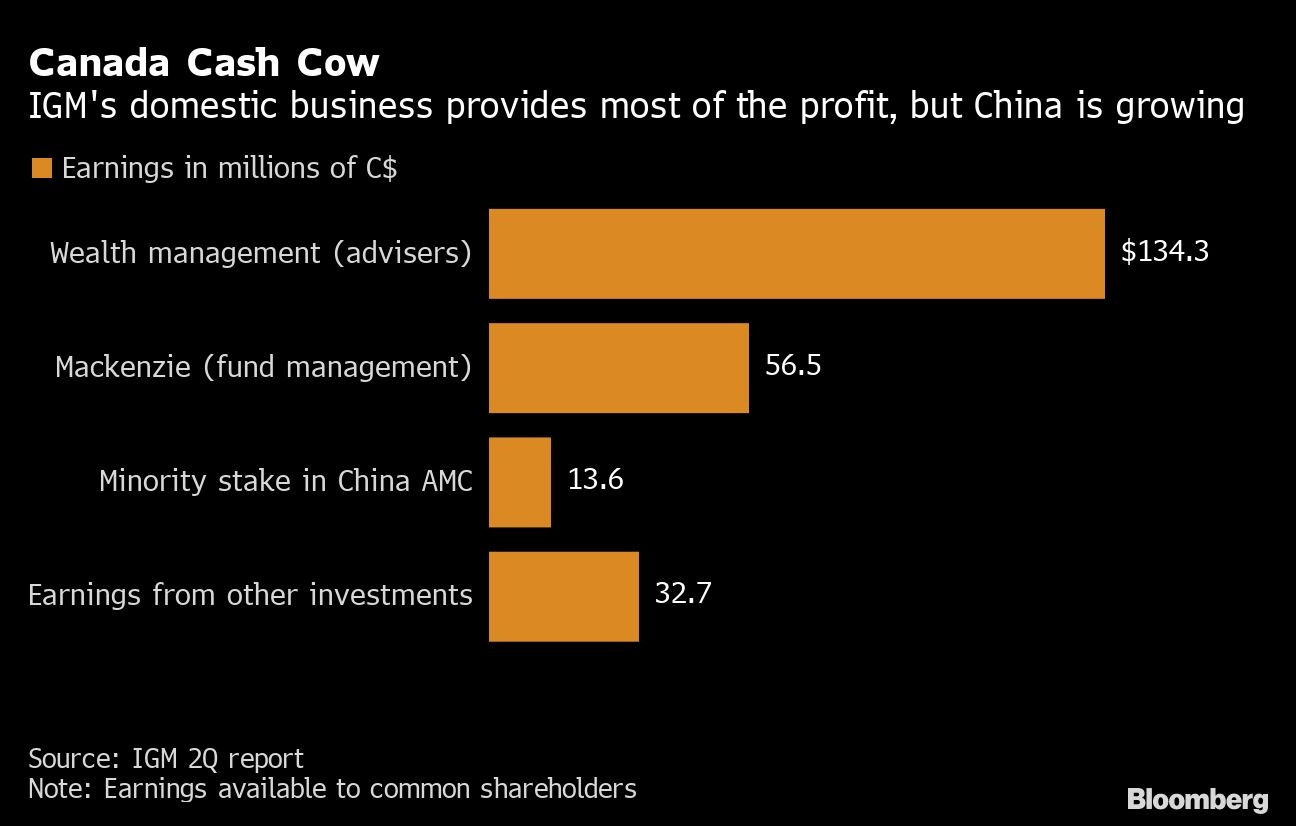 In ESG investing, the Winnipeg, Manitoba-based company is still a small player. It has launched a number of sustainable funds, and last year it struck a deal to buy Greenchip Financial Corp., a Toronto-based boutique that’s focused on environmentally-sound investments.

“If there were opportunities to do more in ESG investing, that would be of appeal,” O’Sullivan said. The firm might also seek out deals in alternative assets, where it expanded last year with the acquisition of a stake in Northleaf Capital Partners Ltd., a manager of private equity and private credit.

The recent acquisition streak has helped revive the market’s interest in IGM after a long slump. The share price, which ended last year lower than it was at the end of 2004, is up 33 per cent so far this year.

That’s partly because of excitement about Wealthsimple, a more reserved, Canadian version of Robinhood Markets Inc. Despite selling some shares three months ago, IGM is still the largest holder in Wealthsimple; its 23 per cent stake is valued at $1.15 billion.

Another minority investment that’s making a contribution is IGM’s 14 per cent stake in fund manager China Asset Management Co., which in bought in 2017. IGM’s share of China AMC’s earnings grew 47 per cent in the second quarter compared with the same period in 2020.

IGM would like to grow more in China, but it won’t seek a deal with a competing fund manager there, O’Sullivan said. The company might be interested in Power Corp. of Canada’s 14 per cent interest in China AMC, if Power decides to sell it to simplify its own corporate structure, he said.

Power is a holding company that’s the ultimate controlling shareholder of IGM Financial and Great-West Lifeco Inc., one of Canada’s major life insurers.

Any deal would have to make IGM’s core business stronger and boost returns for shareholders, O’Sullivan said. And the hunt for assets to buy is competitive.

“If a good wealth manager comes up for sale in this country, there’s probably going to be a lineup of potential buyers,” he said. “They are scarce resources, and they’re scarce because the earnings profile tends to be stable.”