A global recession is coming, but David Rosenberg is cautioning investors not to look to an inverted yield curve for reasons why.

“This is going to be a capital-spending-led recession,” Rosenberg, the senior economist and strategist at Gluskin Sheff + Associates told BNN Bloomberg in an interview on Thursday. “The consumer will follow like a domino.”

“What really hit me in the second quarter was the negative sign in front of U.S. business capital spending. And, what’s happening globally is we are having a collapse in investment growth, and what that’s leading to is a classic savings glut.”

Investors are eyeing U.S. Treasuries, as the yield on 10-year bonds recently dipped below the two-year, signaling darker days ahead.

However, former U.S. Federal Reserve chair Janet Yellen cautioned that the inversion may not be the black cloud it traditionally has been this time around.

“Historically, [the yield curve inversion] has been a pretty good signal of recession… I would really urge that on this occasion it may be a less good signal,” Yellen told Fox Business Network on Wednesday. 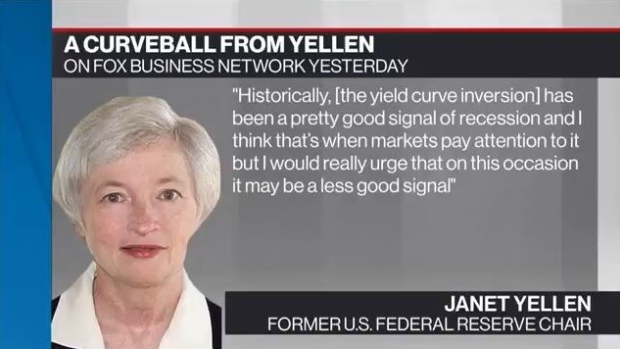 The real issue, according to Rosenberg, is declining interest rates.

Rosenberg is also concerned with the global economy’s ability to halt its skid, once a recession fully kicks in.

“We don’t have the traditional fiscal, or, certainly monetary policy bullets anywhere in the world to fight the next recession,” he said. “So, I think that’s something else we have to consider: It’s not really about peak-to-trough decline. It’s: Once it starts, how do we get out of it?”