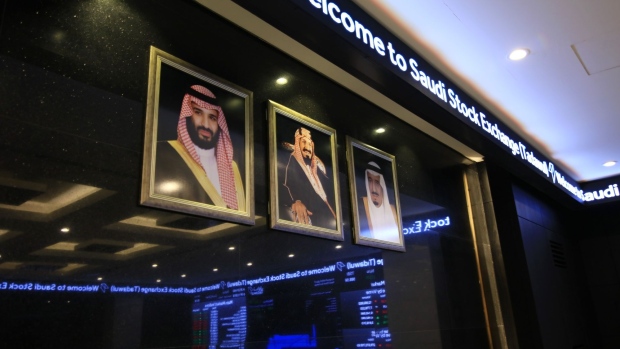 (Bloomberg) -- Saudi Arabia will remain the busiest of the Middle East’s stock markets, even as the United Arab Emirates pushes more companies to go public, according to Goldman Sachs Group Inc.

Saudi Arabia remains “the biggest driver for Middle East ECM,” he said in an interview. “However, we’re seeing Abu Dhabi Inc. becoming more active and obviously the comments out of Dubai’s government will drive bigger volumes from the UAE going forward.”

Riyadh has had more listings than any of its Gulf rivals in the past year. Saudi Arabia’s economy, the biggest in the Middle East, has been boosted by the surge in oil prices to over $85 a barrel and the government easing coronavirus lockdowns. The Tadawul All Share Index is up 8% this year, making it one of the world’s best performers, data compiled by Bloomberg show.

Since the initial fallout from Malaysian fund 1MDB’s fraud and bribery scandal, Goldman has emerged as the top underwriter for equity offerings across the Europe, Middle East and Africa region for three consecutive years, even as some of its most senior bankers left. In 2021, the New York-based bank was followed by JPMorgan Chase & Co. and Morgan Stanley.

Goldman has rapidly built its Saudi presence since 2017, when it hired Eyas Aldossari as head of investment banking. That’s helped it catch up with rivals including HSBC Holdings Plc and JPMorgan, which have deeper historical ties in the kingdom.

Goldman was a bookrunner on oil giant Aramco’s record $29 billion IPO in 2019. It was also an adviser on many of the prominent offerings in Riyadh and Abu Dhabi in 2021, including Saudi Telecom Co., Adnoc Drilling and Fertiglobe.

Now, other companies want to follow suit by going public.

In early November, the Dubai government said it aims to sell shares in 10 state-backed companies, part of a bid to revive trading volumes and catch up with Riyadh and Abu Dhabi.

Deals for the skyscraper-studded emirate’s main utility, called DEWA, and its road-toll firm are among the IPOs in the works. Those listings could reshape the Dubai Financial Market General Index, which as of now is dominated by real estate firms, telecommunication companies and banks.

“There’s a desire to make equity markets more representative of the economy,” Wilkinson said. “There’s a huge focus on population growth and investment. They’re focusing on stability and long-term growth in the business center of the Middle East.”