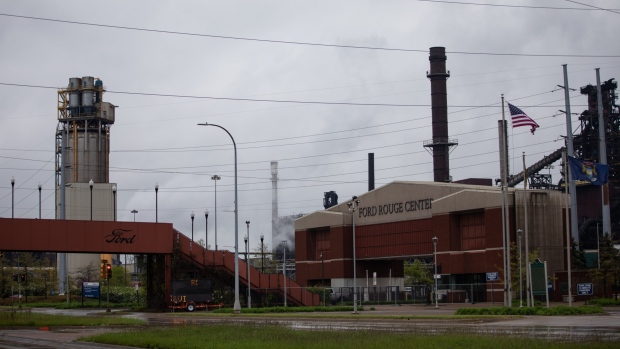 Ford Motor Co. is fielding complaints from union leaders at plants making the automaker’s most profitable vehicle that the company isn’t adhering to safety measures to keep the coronavirus from spreading on the factory floor.

Two United Auto Workers locals at factories in Dearborn, Michigan, and Kansas City, Missouri, which both make the best-selling F-150 pickup, say Ford isn’t sufficiently protecting workers. Ford’s top manufacturing official denies their allegations, saying in an interview that the automaker has stuck to measures detailed in the return-to-work playbook the company crafted along with the UAW.

The locals have levelled their criticisms after multiple workers at both plants have tested positive for COVID-19 since the facilities reopened on May 18. In Dearborn, the union has filed a formal grievance demanding that the plant be closed until it tests all workers.

“The company is backsliding on its public commitment to put people over production and profits during the ongoing COVID-19 crisis,” the Kansas City local wrote on its Facebook page. Automotive News reported on the post earlier.

Ford has been following its playbook “to a T” and it has been working, said Gary Johnson, Ford’s chief manufacturing officer.

“We’re going to learn together,” he said. “We communicate every day and we’re working with the local units on some of the issues that came up and we’ll fix whatever they suggest.”

In situations where the two sides don’t agree, the company will explain its position based on the best practices suggested by the Centers for Disease Control and Prevention and medical experts.

“We walk them through the examples we worked on with the CDC and the doctors and experts we worked with on our return-to-work protocols,” Johnson said, adding that the UAW’s headquarters helps the company communicate those protocols to locals.

UAW Local 600 in Dearborn wants extra break time for workers who wear masks 10 hours a day and 24-hour shutdowns of the plant for cleaning after a worker tests positive. The Detroit Free Press reported the grievance earlier.

“It’s not as safe as it could be if we had done testing,” Walkowicz said in an interview. The plant has had four positive cases since workers have returned to work, he said.

The UAW’s headquarters declined to comment on those specific allegations, but is pushing automakers for more testing of workers and says the safety protocols need to be adjusted as more is learned about the virus.

“We knew there would be challenges when the work sites decided to reopen,” Brian Rothenberg, the UAW’s spokesman, said in an emailed statement. “Safety requires the companies to be diligent and our UAW members to self-report accurately and without retribution to protect exposure at the workplace.”

Ford has been beset by a number of positive cases since it restarted production. When workers are found to have COVID-19, the company has shut down production for a few hours to deep clean areas where the employee was stationed. It’s also sent home those who came in close contact with workers to quarantine for two weeks.