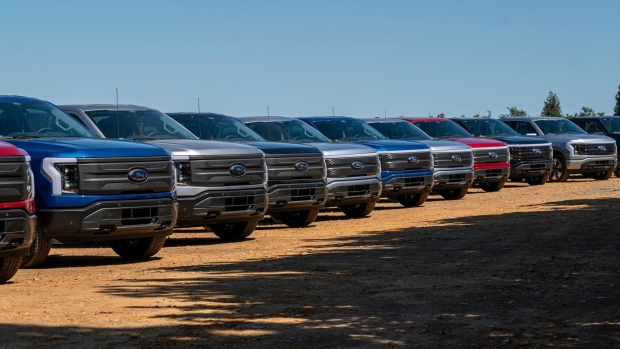 Ford Lightning F-150 pickup trucks during a media event at Vino Farms in Healdsburg, California, US, on Friday, May 20, 2022. With the release of the F-150 Lightning, Ford hopes to electrify new and traditional truck buyers alike, and eventually to replace its industry-defining gas-powered line. , Bloomberg

The F-150 Lightning Pro, the cheapest version of the battery-powered truck, now starts at $51,974, up 30% from the original starting price of $39,974 when the truck went on sale in May. Ford boosted the Pro’s price in August to $46,974, citing rising component costs.

“Ford is adjusting the MSRP on the 2023 F-150 Lightning Pro due to ongoing supply chain constraints, rising material costs and other market factors,” the company said Wednesday in a statement. “We will continue to monitor pricing across the model year.”

Only the Lightning Pro model, which is aimed at commercial customers, is getting a price increase in this round, Ford said. The Lightning XLT, which targets individual retail customers, continues to start at $59,474.

Customers who already have orders in for the truck will not be affected by the price hike, Ford said. Automotive News reported earlier on the increase.

The Lightning’s original sub-$40,000 starting price was a major brag point when Chief Executive Officer Jim Farley first unveiled the truck in 2021. Ford saved money developing the Lightning by repurposing much of the gasoline-fueled version the F-150 while stuffing a big battery underneath.

But Ford executives have said profits have evaporated on EVs as battery and other material costs have risen. And Farley is driving to boost profits throughout Ford’s lineup, which he has said is “under-earning.”