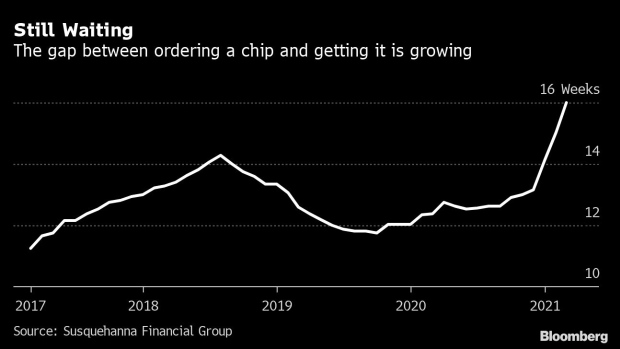 (Bloomberg) -- Ford Motor Co. will halt production at its German plants for several weeks due to a lack of semiconductors, the latest sign of the severity of the global chip shortage.

The automaker will stop production at its Cologne plant twice, from May 3rd to June 18th and then from June 30th until workers return from the summer break in mid-August. Output at its Saarlouis factory will also halt for much of the current month and into June, according to the company.

“We will make up for the lost production as best as we can,” a Ford spokesman said via email. “We are working to improve the situation as soon as possible.”

News of outages in Germany comes after Ford last week said the dearth of semiconductors would cut its second quarter production in half, joining a list of automakers flagging fresh stoppages. In recent weeks, Jaguar Land Rover Automotive Plc, Volvo Group and Mitsubishi Motors Corp. and BMW AG have joined the list of carmakers idling factories.