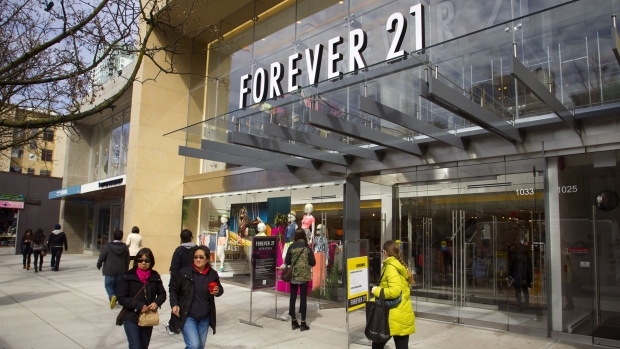 Forever 21 Inc.’s effort to finance its exit from bankruptcy is hitting resistance from some prospective investors over lagging sales at its remaining stores and who will control the fashion chain.

Revenue is below expectations, which has made some would-be lenders hesitate, according to people with knowledge of the talks. Inventory bottlenecks also threaten to curtail sales during the crucial holiday season, said people familiar with the chain’s operations. They asked for anonymity because the details are private.

The process of shopping for an exit loan is still in early stages, however, and has yielded some initial interest from potential lenders, according to one of the people.

Some owners of the malls that host Forever 21 have also participated in talks, both before and during the bankruptcy process, the people said. The landlords -- reluctant to lose another big tenant in a year of record store closings -- have floated the idea of converting some of the rent obligations into an ownership stake, according to the people. They’ve already granted rent concessions significant enough to let Forever 21 keep open dozens of stores it had slated to close.

A representative for Los Angeles-based Forever 21 declined to comment.

Concerns about leadership and ownership also have resurfaced in early conversations about financing the business, one person said. Bloomberg reported previously that talks with landlords before its bankruptcy broke down amid disagreements over the founding Chang family’s desire to keep control.

The company’s forecast filed with the court on Oct. 15 projects negative net cash flow of US$19.1 million for the 13 weeks through Dec. 21. Total receipts are expected to be US$722.3 million, but expenses and fees will cost US$653.5 million and financing activities will account for US$87.9 million, according to the document.

The retailer is now in the biggest sales period of the year, when it’s essential to have well-stocked shelves and adequate staffing. Lenders watch holiday performance keenly, and a difficult season could weaken support from creditors and vendors.

Forever 21 is aiming to complete a draft of its plan by the end of the year for an intended exit from bankruptcy in February, one person said. If it can’t meet certain deadlines to fund its exit plan, it will pursue a sale instead, the person said. Its next court hearing is scheduled for Dec. 19.

RCS Real Estate Advisors negotiated the new leases, according to a court filing, and Lazard Ltd is running the exit process.