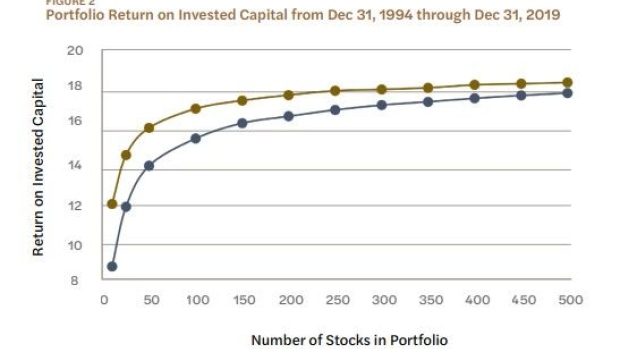 A Wall Street sign is displayed under scaffolding near the New York Stock Exchange (NYSE) in New York, U.S., on Friday, May 26, 2017. Foreign investors are coming back to the U.S. equity market in a big way after a two-year hiatus, lured by a softening dollar and diminishing odds that the Federal Reserve will hasten the pace of interest-rate increases. , Bloomberg

(Bloomberg) -- How many stocks does a portfolio need to mimic the market reliably? It’s become fashionable to say not too many: maybe as few as 30. New research claims that’s delusional.

It’s work by Roni Israelov, a former principal at AQR Capital Management and now chief investment officer for NDVR. After examining risk and return in model portfolios of various sizes during the 25 years through 2019, Israelov and his colleague Yin Chen found that a fully diversified portfolio needs way more stocks than people think to avoid “unlucky outcomes.”

They were testing an increasingly popular notion in academic circles that says stuffing just a few dozen stocks into a fund is enough to ensure it behaves like the broader market. While that holds true a lot of the time, Israelov found, it falls apart at the margin -- too many bad outcomes befall investors with too few stocks. Depending on what’s in the basket, a less-blessed investor can suffer way worse returns or higher volatility.

“The traditional studies essentially just assume everything has the same expected return and the same volatility,” Israelov said in an interview. “That’s a large part of where the problem lies -- you know, stocks don’t have the same average returns.”

The way he sees it, the purpose of a diversified portfolio is to reduce the role of luck in performance. By his estimate, achieving that requires at least 200 stocks.

The reasons people are wrongly persuaded by the concentration argument are complicated but might be summarized as follows. Looked at from the top down, portfolios made up of 20 or 30 or 100 or 200 stocks all tend to bounce around in a similar way. Their “average volatility” is basically the same, leading analysts to conclude that the experience of owning them must be the same, too.

Israelov decided to test the idea in a cumbersome but particularly real-world fashion, by letting a computer pick out and build thousands of random stock portfolios over two decades and see what they actually do. The idea was to check if the top-down approach was masking wrinkles in the returns ordinary investors actually pocketed from portfolios of different sizes.

He found that it was. While average volatilies among different-sized combinations were similar, smaller portfolios in Israelov’s computer-generated research kept spitting out a weirdly high number of bad outcomes when compared with the market as a whole. The more stocks you added, the less often they did this.

The finding is a broadside against a popular view that argues that burdens including the cost of keeping track of a large number of holdings means managers should put a lid on how many stocks they own.

While diversification isn’t the goal of every investor, a look at exchange-traded funds shows they generally keep a fairly low level of holdings. According to data compiled by Bloomberg, the median size of actively managed ETFs is 35 stocks. For all ETFs it’s 104.

How to construct portfolios or measure their performance is the topic of extensive Wall Street research, more so in a year when the Federal Reserve’s most aggressive monetary tightening in decades has sparked a violent selloff across assets. The S&P 500 sank into a bear market, wiping out all its post-pandemic gains when adjusted for inflation.

Earlier this month, Inigo Fraser Jenkins at AllianceBernstein proposed that actively managed funds should consider using inflation as a yardstick in the era of runaway consumer prices, rather benchmarks like the S&P 500.

Israelov’s team built 5,000 portfolios of various sizes that rebalance monthly. They theorized that if a certain-sized portfolio was truly diversified, it would avoid outlier returns that strayed way below the market. Certain groups of stocks will always be unlucky ones; the idea was to make sure even that didn’t do undue damage to returns.

Plotting the worst outcomes for a wide range of baskets where the number of stocks spans from 10 to 500, the team found that differences among outcomes remained high until the size got to around 250 stocks. Anyone holding 20-30 stocks was at risk of missing considerable upside. How much? Even a particularly unlucky 250-stock investor ended up about 40% richer than a particularly unlucky 25-stock investor during the study’s period.

The finding, Israelov says, should be of interest to investors who flock to the niche market of direct indexing, where they’re often recommended to hold 60 to 80 stocks to replicate a benchmark’s performance.

“What we try to do is really pick things apart and understand the behavior of different decisions,” he said. “From the diversification side, you know that 60 to 80 wasn’t quite as many as we thought would be beneficial.”