Rapid rise of Bank of Canada bank rate and bonds

The Bank of Canada was clear in signalling that future hikes to its key policy rate will be data-dependent, according to a former economist for the Canadian central bank.

“I think the language is relatively clear that further hikes are really data-dependent,” said Charles St-Arnaud, chief economist at Alberta Central and former Bank of Canada economist, in a phone interview on Wednesday.

“It really depends on what we're seeing on the inflation front and if we start to finally see a bit more slack in the labor market.”

Arnaud said economists should be paying close attention to the next few reports for the consumer price index and labour force, since if inflation continues to ease, the Bank of Canada would feel more comfortable holding rates.

On Wednesday, the Bank of Canada hiked interest rates by half a percentage point to 4.25 per cent. This was the second straight time that the Canadian central bank increased its key policy rate by 50 basis points. 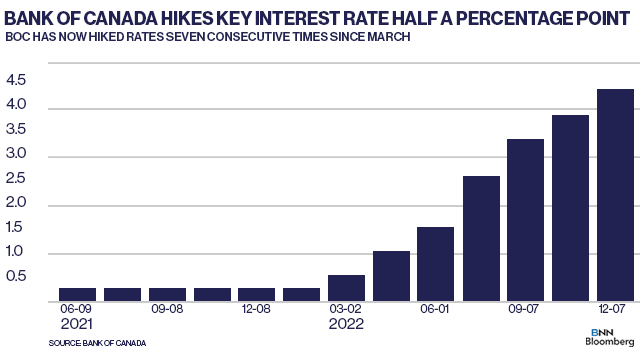 ASSESSING THE IMPACT OF HIGHER RATES

Since March, the Canadian central bank has raised interest rates seven times in a row.

Arnaud said at this moment, the Bank of Canada will most likely want to assess the impact of these increases.

“It's clear they're feeling that they've done a lot already. They may want to assess what will be the impact of all those increases, since we have to remember that rate hikes work with a lag on the economy,” he explained.

“We see the impact a bit faster on, for example in the housing resale market, but on the broader economy it takes six months to almost a year.”

LEARNING FROM THE MISTAKES OF THE 1970S

Arnaud said it’s clear from the Bank of Canada’s actions this year, that “they do not want to repeat the mistakes of the 1970s, when we had hyperinflation.”

According to the Bank of Canada Museum’s website, “on average, throughout the 1970s, prices increased by about eight per cent per year.”

“In the 1970s we had hyperinflation, we had big commodity price shocks early in that decade and central banks were too slow to react,” Arnaud explained.

“Inflation expectations had started to increase and embedded that higher inflation more permanently, which made the work to bring inflation back down harder and required more rate hikes down the road, than if they would have been more proactive.”

He said the central bank has learned “to be proactive early” and take action.

“But now I think the big worry is ‘Are we doing too much?’ I think Governor Macklem really explained it well in the last meeting, that it's a very fine line between doing too much, and not enough.”