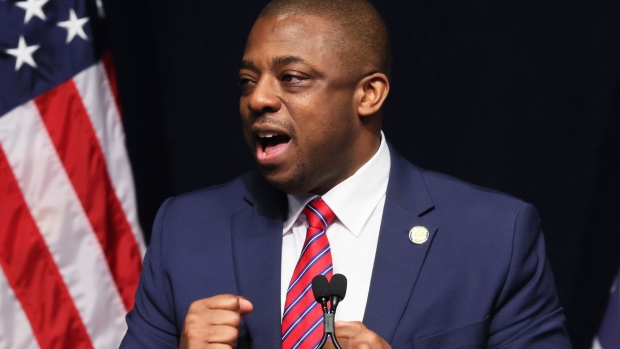 (Bloomberg) -- Former New York Lieutenant Governor Brian Benjamin won dismissal of bribery charges in a case where he was accused of taking corrupt campaign donations from a real estate developer.

US District Judge J. Paul Oetken on Monday threw out three criminal bribery counts against Benjamin, ruling that US prosecutors had failed to allege “an explicit quid pro quo” between him and the developer, “an essential element of the bribery and honest services wire fraud charges” against him.

Benjamin still faces two counts of falsifying records tied to his state senate campaign and a questionnaire he filled out as part of the vetting process for the position as the No. 2 state official in the administration of Democratic Governor Kathy Hochul. Benjamin stepped down from the post on the day in April when charges were announced.

Hochul selected Benjamin to be her lieutenant governor shortly after taking over as governor in the wake of Andrew Cuomo’s resignation in August 2021.

Prosecutors claimed Benjamin illegally obtained donations from a real estate developer, then used his authority as a state senator at the time to obtain a $50,000 grant of state funds for a nonprofit organization controlled by the developer.

Benjamin’s lawyers said there was nothing inappropriate about the grant and  “every dollar” was used to buy supplies for public school students in Harlem.