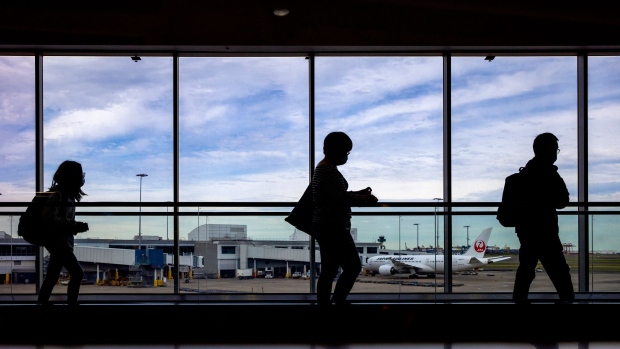 SYDNEY, AUSTRALIA - JUNE 23: Travelers are seen at Sydney International airport on June 23, 2021 in Sydney, Australia. Sydney records 16 new locally acquired COVID-19 cases as strict new social distancing restrictions come into effect at 4pm today. Masks are now compulsory in all indoor non-residential settings, including workplaces. No singing or dancing at venues, dance and gym classes to have a maximum of 20 people at any given time and no more than five visitors to any household, which includes children. (Photo by Jenny Evans/Getty Images) , Photographer: Jenny Evans/Getty Images AsiaPac

(Bloomberg) -- Hundreds of overseas workers could be welcomed to Australia in the next 10 months, under a new class of visa the government is creating to aid the post-pandemic recovery -- even as tens of thousands of its own citizens remain stranded overseas.

The visa will streamline entry requirements to allow the rapid relocation of workers critical to establishing a business in Australia. Fewer than than 500 of the temporary Activity (subclass 408) “Post Covid-19 Economic Recovery Event” visas are expected to be granted during the next 10 months, before the the program is designed to expire.

“This government’s initiatives to bring top talent to Australia are cementing our economic recovery,” Home Affairs Minister Karen Andrews said in an emailed statement. “Returning Australians remain the priority, however this automatic travel exemption recognizes the importance of significant investment.”

At the start of the pandemic in March 2021, Australia implemented a ban on non-citizens and non-residents from entering the nation that’s exacerbated skills shortages in some key industries and services. Strict caps have also been placed on its own citizens; as of late July, some 38,000 Australians were still stranded abroad.

The measures, some of the strictest in the world, earned the country the nickname “Fortress Australia.” In recent months, the government cut international arrivals by 50% and barred non-resident citizens who enter the country from leaving again to reduce pressure on a quarantine system that’s being tested by the delta variant.

That strain seeded itself in Sydney in mid-June; now around half the nation’s population of 26 million people are in lockdown as authorities seek stem an outbreak that’s infecting more than 1,500 people a day. New South Wales, the most-populous state, is seeking to start remove lockdown restrictions and start allowing international travel again later this year when vaccination thresholds are reached.

The government’s automatic exemption for skilled non-Australians will be restricted to businesses deemed by the Global Business and Attraction Taskforce as likely to make a significant contribution to economy, including investment value and job creation potential. Arrivals will still need to meet all standard health requirements and quarantine protocols, as administered by states and territories.

“These visa holders are bringing the skills, investment, and new ideas that employ Australians and keep us internationally competitive for years to come,” Andrews said in the statement. “They’re adding to our economy, generating new jobs, and contributing to our tax base so we can continue to provide the essential services all Australians rely on.”