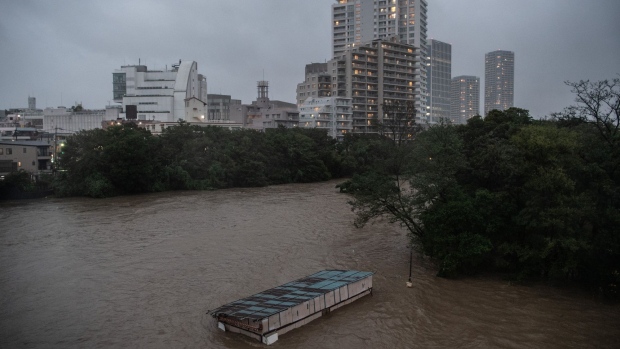 A cafe lies submerged as the Tama River floods on Oct. 12. , Getty Images via Bloomberg

(Bloomberg) -- At least four people died and 17 were missing as a powerful typhoon slammed Japan, causing flooding and landslides across the central and eastern parts of the country and leaving hundreds of thousands without power.

More than 100 people were injured as many areas were hit by record amounts of rainfall and violent winds, according to national broadcaster NHK. Officials urged residents to be on alert with evacuation orders remaining for about 5.9 million people across 17 prefectures, according to the Fire and Disaster Management Agency.

Typhoon Hagibis had moved away from the island by Sunday morning. It was located off the Sanriku coast as of 8:45 a.m. local time, according to the meteorological agency.

More than 420,000 buildings across the country have lost electricity due to the typhoon, the Ministry of Economy, Trade and Industry said in a statement.

Rugby World Cup organizers canceled a Sunday match between Namibia and Canada in Kamaishi amid safety concerns following torrential rains that caused flooding and landslides around the venue in northern Japan. Games between the U.S. and Tonga, and Wales and Uruguay will still take place, according to a statement on the tournament’s official website.

Organizers early Sunday were still considering whether to hold a closely watched contest between Japan and Scotland.

To contact the reporter on this story: Chikafumi Hodo in Tokyo at chodo@bloomberg.net

To contact the editors responsible for this story: Shamim Adam at sadam2@bloomberg.net, Jeff Sutherland