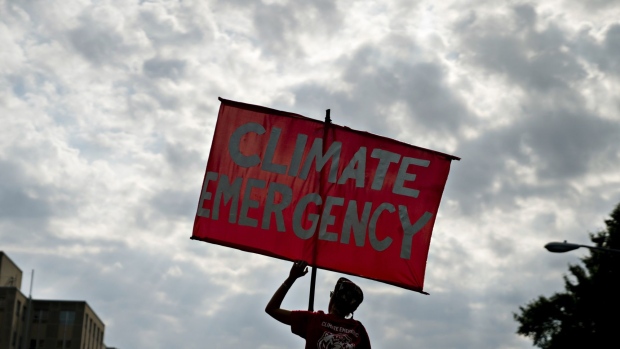 A protester holds a sign that reads "Climate Emergency" while blocking an intersection during the Shut Down DC climate demonstration in Washington, D.C., U.S., on Monday, Sept. 23, 2019. Heads of state from France to India are gathering in New York this week along with some of the world's top corporate leaders for a climate summit as protests demanding curbs in carbon emissions expand across the globe. Photographer: Andrew Harrer/Bloomberg , Bloomberg

(Bloomberg) -- France is pushing back against the European Union’s proposal to launch a new carbon market for heating and road transport, a move that worries some other EU nations and that’s quickly becoming the most controversial part of a new climate plan.

Days after the EU’s ambitious plan to tackle climate change was announced, France began lobbying behind the scenes to water down or delay the new carbon market, a central plank of the bloc’s proposal, people familiar with the matter said. Several countries, including the Netherlands and Hungary, are also concerned about its social impact, according to EU diplomats with knowledge of the talks.

Along with other European leaders, French President Emmanuel Macron is struggling to balance climate targets with his own political constraints, Macron’s government could intensify its push against the carbon plan when France takes over the EU’s rotating presidency in January.

France’s goal, the people said, is to try and build enough support to either scrap the proposal or adjust it to make room for increased financial compensation for people affected by the spike in prices the measure is expected to trigger.

EU governments expressed “quite a lot of reservations” at a meeting in Slovenia on Tuesday about carbon market plan, Slovenian Environment Minister Andrej Vizjak said.

“It is going to be quite a hard nut to crack,” Vizjak said after EU environment ministers discussed the plan for the first time since the announcement. “I think at the beginning the commission will have quite a lot of explanations to make. But I’m sure that at the end of the day we will come up with a compromise”

The new carbon market would extend emissions trading to heating and road transport as part of a broader package to align the economy with a target to cut emissions by at least 55% by 2030 from 1990 levels.

While carbon markets can force a shift away from fossil fuels, they have also raised concerns that prices will be passed on to consumers, a highly sensitive issue for Macron ahead of April’s French presidential election.

Macron often portrays himself as an environment champion and has made climate concerns a flagship foreign policy objective. But he’s also battling the legacy of his controversial plan in 2018 to raise gas taxes, which triggered a wave of sometimes violent protests by mostly low-income workers nicknamed Yellow Vests.

While the Yellow Vests protests have largely gone away, some popular anger continues to be focused on Macron, a former investment banker seen by many as out of touch with average people. After more than a year of restrictions on public gatherings to contain the coronavirus, anger has returned in recent days, this time against Macron’s plan to isolate and pressure people who refuse to be vaccinated.

French environment minister Barbara Pompili slighted the commission’s plan in a recent television interview as a mere “proposal” and stressed that “France has voiced reservations on the creation, the rise of carbon taxes for buildings and transport.” Citing the Yellow Vest movement, she said that “when you do not accompany people, it can’t work.”

Macron has at times been torn between ambitious environmental pledges, especially on the international stage, and economic interests. Politics has also gone on the way. His government recently ditched a plan to try and enshrine environmental protection in the constitution after disagreements with lawmakers over how to phrase the provisions.

The country is also resisting on the EU’s proposal to effectively phase out combustion-engine car sales by 2035, advocating for a more lenient target and for hybrid vehicles to remain on the market longer than that deadline and protect its auto industry.

France Pushes Back Against EU Banning Combustion Cars by 2035

EU officials claim that the new package, dubbed “Fit For 55”, won’t be too costly for average citizens. Instead, they say, revenues from the carbon market will back a fund to curb low-income households’ fuel bills. The aim is to bolster existing transition funds and create a new one to protect the most vulnerable households.

The EU will now embark on a lengthy sales pitch for its ambitious plan, which has to be approved by member states and the European Parliament.

“We want to have it managed in a rather controlled manner so that the introduction of the price signal does not create a big revolution,” Kurt Vandenberghe, EU Green Deal adviser to Commission President Ursula von der Leyen, said Tuesday during a webinar. “That’s why we will start only in 2026, and we have taken precautions to make sure there’s no big shock on the system.”

Yet one person familiar with France’s position said the EU’s promises weren’t sufficient, and the origin of these funds must be clarified.

An official at the French ecology ministry said that France’s reservations could be lifted after France performs its due diligence on the EU proposal. While Macron’s government would rather not to bring up the Yellow Vests as a wild card every time, there may be a similar effect, the official said, citing the example of households using heating oil.

It’s not clear, however, that France and other nations will end up blocking the carbon market plan. The bloc has broadly agreed on ambitious -- and expensive -- climate targets, and the years-long fight over the details are just beginning.