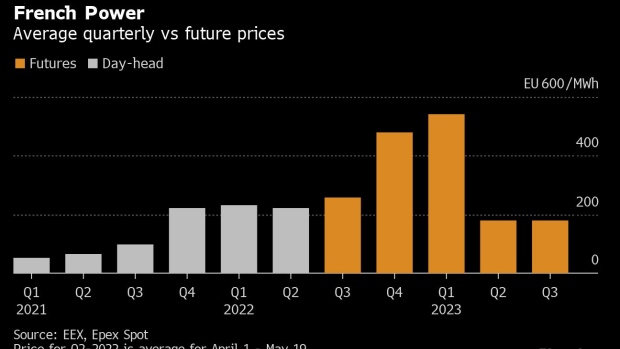 (Bloomberg) -- French electricity prices climbed after the region’s biggest power producer cut its nuclear output target for a third time this year, the latest sign that the region’s power crisis is worsening.

Less electricity from Electricite de France SA’s fleet, the backbone of Europe’s integrated power system, is sending prices higher just as soaring inflation is pushing up costs for everything from gasoline to food. It could get even worse in winter as France, a traditional exporter of electricity, may be forced to import more from its neighbors.

French power contracts for the fourth-quarter jumped as much as 8.6% after EDF lowered its annual target for this year to 280 to 300 terawatt-hours from 295 to 315 terawatt-hours previously. The outlook for the following year remains unchanged for now, the firm said.

The big test will come when the temperatures start to fall toward the end of the year. It won’t take many days of cold weather to jeopardize French power supplies, according Emeric de Vigan, chief executive officer at French energy analysis firm COR-e.

“Which such poor nuclear availability, if we reach 2 degrees Celsius below normal in the winter for a few days we could be in trouble, it would be really tight,” he said. Paying customers and factories to lower consumption are steps that likely will need to be taken, he said.

Western Europe has for decades relied on exports of power from EDF’s nuclear fleet. The cuts are another blow to European energy security just as the region is weaning itself off Russian supplies of everything from natural gas to coal and oil because of the war in Ukraine.

The fourth-quarter French power contract was up 3.2% at 480 euros a megawatt-hour as of 10:07 a.m. local time on the European Energy Exchange AG. It traded at a record 531 euros earlier this month.

Less output from EDF’s plants also mean a higher dependency on fossil fuels to keep the lights on when demand peaks. Output from the fleet of 56 nuclear reactors is forecast to be 25% lower than usual this winter, according to a recent analysis by Baringa Partners LLP. Higher imports would also push up prices in neighboring markets, the industry consultant said.

Europe’s Biggest Exporter of Power Might Need Imports in Winter

The challenges for the utility are now so great that President Emmanuel Macron has suggested some of its key activities could be nationalized as part of a broader plan to bolster the country’s energy independence.