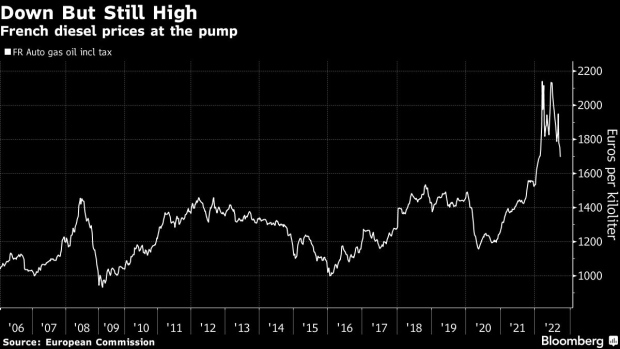 (Bloomberg) -- France’s top oil refinery is set to halt because of a workers’ strike over pay, the latest hit to the nation’s fuelmaking capacity from the weeklong industrial action.

TotalEnergies SE is halting its refinery in Normandy, according to a union official. The step means almost two-thirds of the nation’s oil processing is now either fully offline or severely impacted by strikes or a recent fire. Exxon Mobil Corp., whose plants are also affected, said it’s limiting fuel supplies.

The dispute underscores the tensions that have been bubbling up in the wake of a cost-of-living crisis that stretches far beyond France’s borders. The unions are seeking a bigger share of profits that oil companies made from soaring energy prices.

The Normandy shutdown means France’s two biggest refineries, both located near the port of Le Havre, will be out of service due to strikes. Exxon already halted its nearby Gravenchon, as well as a smaller refinery in the south.

It means there will almost no refining capacity working in northern France, although the region can also take in cargoes by sea.

“I confirm limitation in place, we are working with our independent distributors and wholesale fuels customers to help meet consumer demand for fuel,” Exxon France said in response to questions about whether it was curbing fuel supplies. “Efforts are under way to supply products from unaffected sources.”

Read more: France Is Hit by Strikes Over Pay at Multiple Oil Refineries

The process of shutting down Normandy will last a few days, according to Thierry Defresne, secretary of the European workers’ committee at Total, and an official at CGT. Online alerts to local residents also said refinery and petrochemical units at Normandy were being taken offline.

The longer the action endures, the greater the potential damage it can do to France as it grapples with a wider surge in energy costs. The nation’s nuclear reactors are set to undergo more work this winter than previously planned, and Russia has cut gas flows to Europe sharply. Both developments have led to a spike in energy prices across the continent.

A prolonged strike could also have implications for France’s retail fuel prices, which have fallen sharply from their peaks earlier this year, tracking declines in oil prices and fuel markets elsewhere in the world.

(Updates with Exxon comments about supply limits in second paragraph.)