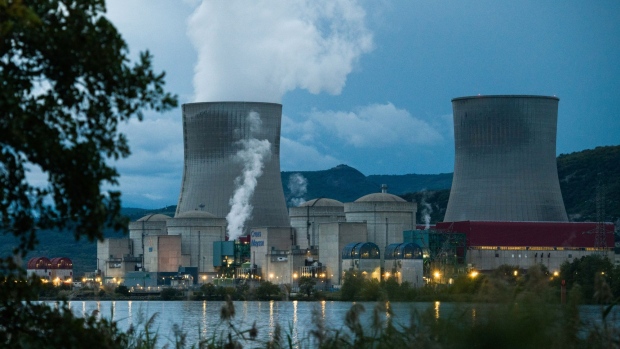 Vapor rises from a cooling tower in the Cruas Nuclear Power Plant, operated by Electricite de France SA (EDF), on the River Rhone in Cruas, France, on Saturday, Sept. 24, 2022. France President Emmanuel Macron has been making the case for energy savings and more investment in clean power and new nuclear plants to curb fossil fuel use and fight climate change. , Bloomberg

(Bloomberg) -- France will seize the windfall profits of electricity producers next year to bolster aid to companies and local governments struggling to pay rising energy bills.

The government will take any surplus made by power generators when they sell above 180 euros ($179) per megawatt-hour, as recently agreed at a European Union level, Finance Minister Bruno Le Maire said. The mechanism, which will be introduced in the 2023 budget bill, should fetch between 5 billion euros and 7 billion euros in extra revenue.

“What we have put in place is fair and balanced,” he told a news conference in Paris. “We’re not taxing everyone, as some people propose. We’re just saying that energy companies can’t benefit unduly from unearned income linked to crazy prices.”

Governments across Europe have been responding to surging energy costs caused by Russia’s dwindling gas deliveries with tens of billions of euros of tax cuts and subsidies for households and businesses. But more manufacturers are reducing output as they struggle to cope with soaring bills. French wholesale power prices have shot even higher than in most neighboring countries amid production issues at some of utility Electricite de France SA’s nuclear plants.

Le Maire said a 3 billion-euro fund the government had already put in place until the end of this year to help medium-sized and large companies pay their electricity bills probably won’t be enough.

France is asking the European Commission to double the maximum amount it can hand out to struggling businesses and is considering even more aid for “strategic” companies that use a lot of power for industrial production such as Aluminium Dunkerque, he said.

The French government will also provide guarantees for companies that struggle to provide their own when signing contracts with energy providers, Le Maire added.

EDF, utility Engie SA and oil company TotalEnergies SE, as well as energy trade groups and others, have signed a charter to help customers navigate contract renewals in France, according to the minister.

Like households, about 1.5 million very small companies will continue to benefit from regulated tariffs, whose rise will be capped at 15% next year, he reiterated. The government will also soon announce the volume of power that EDF, which is being renationalized, will have to sell at a discount to rivals as part of its strategy to keep a lid on inflation.

France will continue to push the EU to adopt subsidies to help reduce the cost of electricity generated by gas-fired power plants, as already introduced by Spain and Portugal, Le Maire added. This would lower the price per megawatt-hour to 200 euros.

The minister said France is ready to consider financial compensation for Germany, which relies much more on gas for generation than its mostly nuclear-powered neighbor.